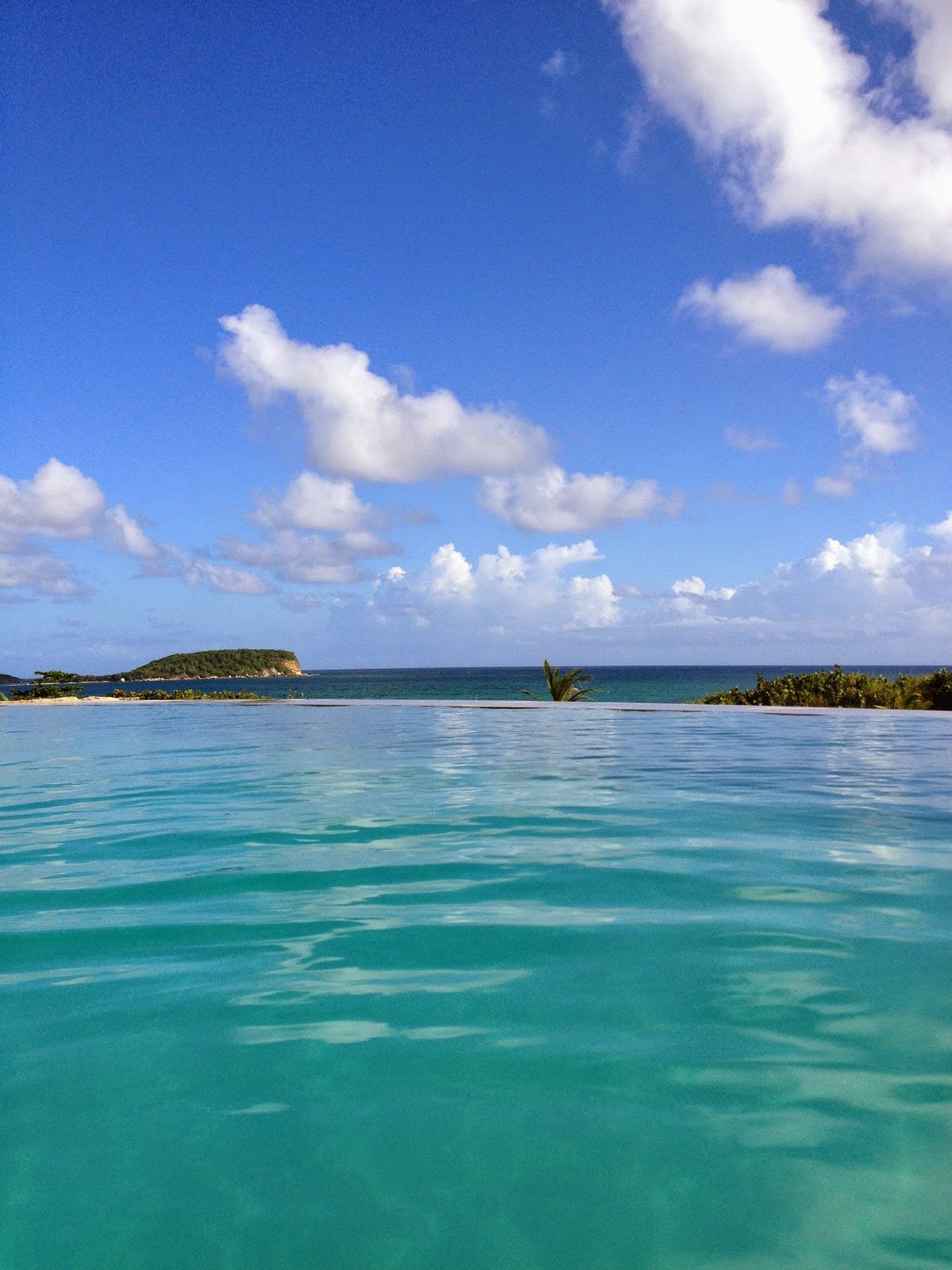 I took this photo in Vieques, an island in the Caribbean, off Puerto Rico. It's an infinity-edge pool with the ocean beyond. I use it a lot on my desk top, etc., because it puts me in a good frame of mind - relaxed and peaceful, just as I'd be, sitting in that place.

State of mind is hugely important, I believe. Recently a (very successful) writer friend of mine asked me about my writing process. She's much more famous and sells FAR more books, but she envies the critical acclaim my books have received. (I told her to console herself with her millions of fans and piles of money, but she only laughed and persisted.) In truth, her process hasn't been working well for her, because she keeps getting slammed hard against her deadlines. Though she outlines *extensively* the last few books have gotten harder and harder to write. I suggested that she try writing the next book without an outline. Take a month and write for discovery like I do. She asked how I do that - how I hold the story in my head without an outline.

Which is hard to explain.

Except that it puts me in mind of this article on the virtues of daydreaming. I've saved this for a couple of years as a reminder to myself that daydreaming is good. It's one of any number of studies that show that daydreaming - idle mental time - promotes creativity. I need the reminder because my childhood programming, the corporate culture I work in and other influences, such as rigorous martial arts training I engaged in for over a decade, all told me that daydreaming is bad. I'm meant to be engaged in the conversation of the people around me, not staring off into space. I'm supposed to pay attention on those conference calls and in meetings. I should be alert and aware at all times, not dreaming of other things.

One thing that martial arts training gave me as a lasting lesson, however, is that cultivating mental quiet is good for more than being aware of my environment so I can anticipate attack. Mental quiet also allows me to hold the story in my head. In the right time and place, allowing myself to fall into a daydream state - or the DreamThink, I've called it in the past - lets me spin those stories.

Our question this week is whether we cultivate daydreaming to come up with our books and, if so, how we guide or direct that.

When I wake up in the middle of the night, I don't worry about it. I don't get up as the sleep specialists say to do. Instead I snuggle in and daydream about the book I'm writing. I do try to guide my DreamThink to whatever I'm working on, but I don't insist on it if another story edges in. I try to be peaceful about it and let my mind drift. If I start thinking about worries or daily cares and lists, that's no good, so I redirect myself back to the fantasy.

Sometimes I wake up early, an hour or so before the alarm, and that's terrific DreamThink time, as I can cook the story right before I get up and write. Sometimes I fall asleep and actually dream. Other times I drift in that perfect twilight state where I'm completely relaxed and cozy and my mind simply floats.

During the day I might daydream. I love gardening for this and other kinds of manual labor. Listening to audio books can induce this state. Something in the story I'm listening to might trigger me and I'll start dreaming about my own story. Then I have to back up, because I stopped listening.

In all of this, I think the key is not to censure myself. I'm a writer, so I pull that card now if someone accuses me of zoning out on the conversation. I just give a brilliant smile and say, sorry, started thinking about my book. This carries FAR more cachet than my childhood rep for dreaminess did. At work, I've realized everyone forgets to pay attention to every nuance of the meeting or call. Maybe it helps to be middle-management now, but I have no shame in asking someone to repeat the question. As for the martial demands that I be alert and aware... let's just say that I write books MUCH more often than I fight off attackers. And that there's a time and place for everything.

The final piece of being careful not to censure myself is to let the daydreaming flow as it wants to. This is a part of myself not bound by rules. When I write, when I edit, then I can impose structure and refinements. For the DreamThink, I give myself permission to go anywhere I like. To be awake or to sleep or be somewhere in between. To dream about what I'm working on or something else entirely. It's all part of the same stew and nothing is ever lost. It's like the primordial ocean, rich, full of life and endless productive.

What do you all think - do you use your daydreaming like this?

(OH! Also, I’ll be teaching a workshop that starts tomorrow, January 5. It’s for Outreach International Romance Writers on Sex as a Tool for Character Transformation. Non-members can register here up through the 5th. (As far as *I* am concerned, you can sign-up anytime, but OIRWA might not feel the same way…))