Born into a world full of comic books and far too many transfers from one apartment complex to another, James A. Moore has been an avid reader since he was able to walk. Eventually he came to understand that the words inside the word balloons on the comic book pages were actually an important part of the story—as important as the pretty pictures—and started considering writing them in addition to reading them.

His first published works were for Marvel Comics, and later for a few role playing games, but these days Jim focuses mostly on novels and short stories, with a changing focus aiming at dark fantasy and other, stranger concepts. When he’s not writing, Jim works at a local Starbucks (Free coffee ROCKS!) and spends his meager spare time working out and watching DVDs when he’s not reading.

His latest release is the novel BLIND SHADOWS, co-written with author Charles R. Rutledge, and SEVEN FORGES, the first in a new dark fantasy series, is scheduled for release in the summer of 2013 from Angry Robot Books. 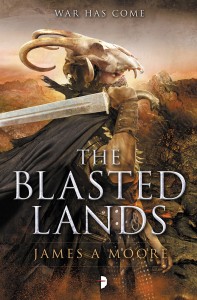 The Empire of Fellein is in mourning. The Emperor is dead, and the armies of the empire have grown soft. Merros Dulver, their newly-appointed – and somewhat reluctant – commander, has been tasked with preparing them to fight the most savage enemy the world has yet seen.

Meanwhile, a perpetual storm ravages the Blasted Lands, and a new threat is about to arise – the Broken are coming, and with them only Death. 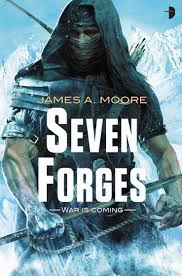 Captain Merros Dulver is the first in many lifetimes to find a path beyond the great mountains known as the Seven Forges and encounter, at last, the half-forgotten race who live there. And it would appear that they were expecting him. As he returns home, bringing an entourage of strangers with him, he starts to wonder whether his discovery has been such a good thing. For the gods of this lost race are the gods of war, and their memories of that far-off cataclysm have not faded.

The people of Fellein have live with legends for many centuries. To their far north, the Blasted Lands, a legacy of an ancient time of cataclysm, are vast, desolate and impassable, but that doesn't stop the occasional expedition into their fringes in search of any trace of the ancients who had once lived there... and oft-rumored riches.

Years ago, scientists began developing the ultimate military weapon: deadly sleeper assassins housed within the bodies of teenagers. Now, Subject Seven, the dangerous alter-ego living inside a 16-year-boy, has escaped the lab and is on a mission. His objective? To seek out others like him and build an army capable of destroying their  creators.

Hunter, Cody, Gene, Tina and Kylie: five teenagers leading typical lives, until the day they each receive a call from a mysterious stranger - and learn that their destines are intertwined. Subject Seven holds the key that connects them all. And a vicious, bloody battle for their lives is just beginning.

When private investigator Wade Griffin moved away from his hometown of Wellman, Georgia he didn't think he would be back. Too many memories and too many bridges burned. But when an old friend is foun brutally murdered and mutilated, nothing can keep Griffen from going home. Teamed with another childhood friend, Sheriff Carl Price, Griffen begins an investigation that will lead down darker paths than he could ever have imagined.

Soon Griffen and Price find that there are secrets both dark and ancient lurking in the back woods of Crawford's Hollow. As Halloween approaches, something evil is growing near the roots of the Georgia mountains, and the keys to the mystery seem to be a woman of almost indescribable beauty and a dead man who won't stay dead.

As the body count mounts and the horrors pile up, Griffen and Price come to realize that the menace they face extends far beyond the boundaries of Wellman and that their opponents seem to hold all the cards. But the two lawmen have a few secrets of their own, and one way of another there will be hell to pay.

Jame's full and extensive bibliography can be found here.