Upping the Tension in a Fight with Dialogue 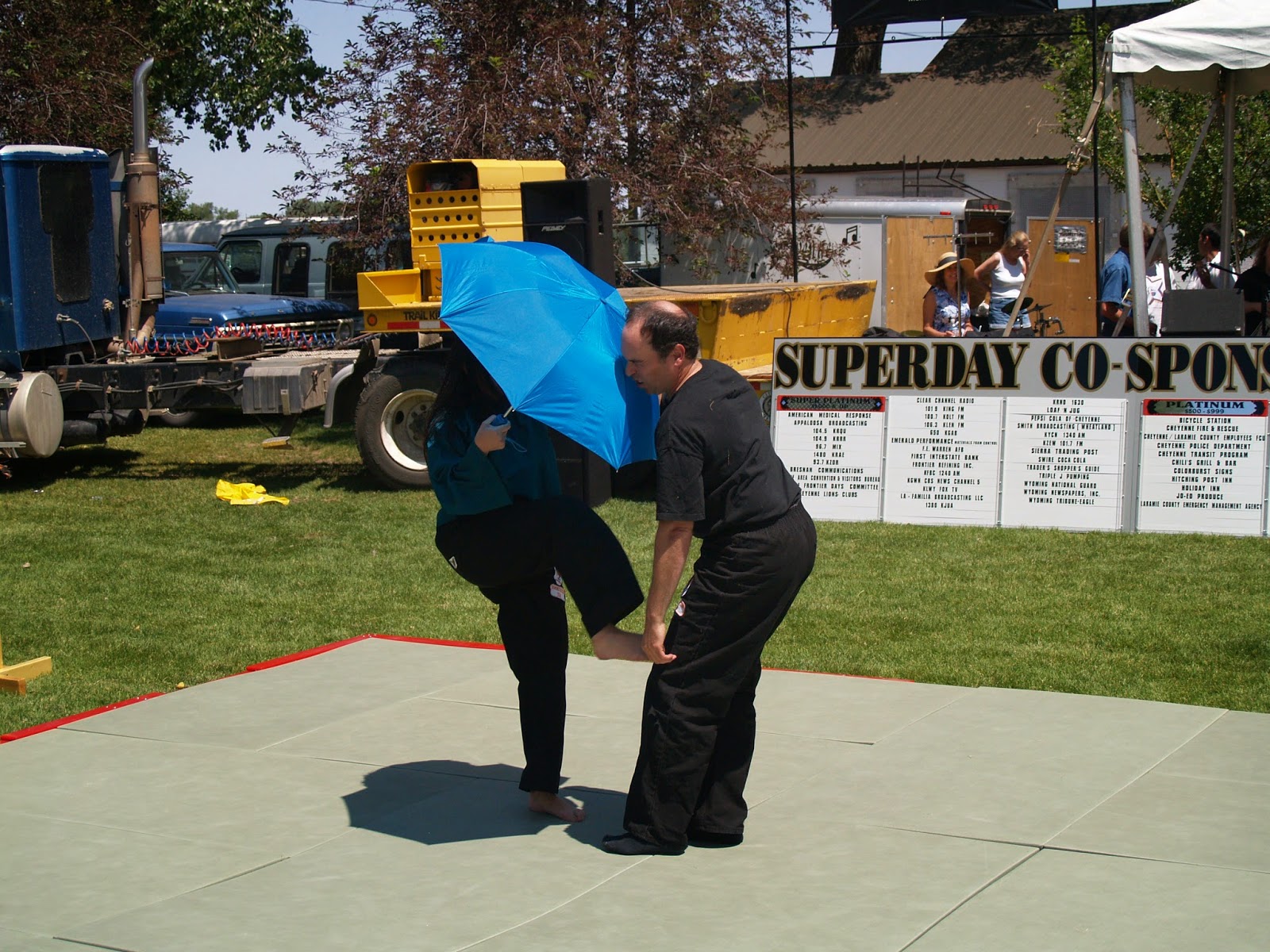 I'm a talky kind of gal, at least in fiction. I tend to be quiet in company, unless you get me going on a particular rant. But writing-wise, I love dialogue. The interplay of ideas, witty repartee, teasing, suggestion, learning, knowing - so many wonderful layers to explore in the interactions between people (or creatures). Talking can be a profound kind of intercourse.

When interviewers ask me for facts no one knows about me - which is always hard to answer, because usually there's a reason it's not public information - I sometimes offer up this relatively little known piece of my history.

I studied martial arts for about fifteen years. Chinese ones - Shaolin Temple Boxing, T'ai Chi, Pakua, Hsing-I, among others.

That's me above, doing a public demo of how to use a common object, in this case an umbrella, to surprise and deflect an attacker - with a nice little snap kick to the jewels to seal the deal.

I drew on this experience to write one of the opening scenes from The Mark of the Tala, where my princess heroine, Andi, is attacked in the wilderness. Because this is more than just a fight, but also the incident that spurs her personal journey and her first encounter with the man who plays a pivotal role, the dialogue between them is as crucial - maybe more so - than the physical fight. I use it here to build tension, much as Andi uses it to stall, trying to think her way out of the situation. The man also uses the conversation, to keep her engaged, to discover exactly who she is and also to sway her judgement.

It's a favorite scene of mine, so I'll paste it in below. It begins when Andi and her horse take a hard fall.

Under the waves, deep under the sea
Sands dissolve the cicatrix of thee.
Cobalt crabs pluck at deep-frozen lies
Eating the corpses of what she denies.

The images, as with the words of the song, ate at me, blurring the edges of who I knew myself to be. Salena. He’d mentioned my mother. What did that mean?
“I’ve never seen you before in my life,” I whispered. It felt like a lie.
Was that Fiona’s nicker in the background? I seized on that. My horse, my life at Ordnung. That was true. Real.
“No. But I thought you would know me anyway.”
“You didn’t recognize me—you thought I was both of my sisters.”
“Did Salena teach you nothing?”
“My mother died,” I snapped.
“Believe me, I know. Her death caused a number of problems.”
“I’m so sorry that the greatest tragedy in my life gave you annoyance.”
The half smile twisted his lips. “More than you can conceive. I’ll make you a deal. Give me a kiss.”
I didn’t reply. My dagger hand had gone numb, but a flex of my fingers reassured me I still grasped the hilt.
“One kiss,” he repeated, “and if you still don’t want to come with me, if nothing happens, I’ll let you go.”
Seemed like a bad bargain on his part, but I wouldn’t point that out.
“Fine.”
“No arguing?”
I shrugged as best I could. “Whatever gets me closer to freedom. Either you’ll keep your word or you won’t. Either way, I’ve given up nothing of importance. And I seriously doubt your kisses are that spectacular.”
“No?” he murmured, lowering his head. “We’ll see.”
Mesmerized, I watched his lips descend to mine. The blood still pulsed, oozing out of the cut, fresh and bright over the dried tracks. Despite his nonchalant words, I felt the tension shimmering through him. This was the moment Ursula had described, when lust clouded their thinking.
“Blood,” I murmured the moment before he touched me.
“What?” His voice rumbled through me, soft, gravelly.
“You have blood on your lips.”
“I know. That’s the point.” With a certain grim determination, his mouth fastened on mine, though I tried to turn my head at the last moment. A bright flash of pain and I realized he’d bitten my lip.
“Thrice-damn you!” I tore my mouth away, struggling.
“Watch,” he ordered, holding me still.
On his lips, the blood seemed to shimmer, then move of its own accord. A tiny bird formed, darkening from the scarlet of fresh blood to black.
Then flew away.
Aghast, enthralled, horrified, I watched it go, an impossible pinprick disappearing against the sky.
“That’s impossible,” I whispered.
The man’s joyful and triumphant smile crashed into disappointment at my words. “You really know nothing at all.”
“Then let me up and you can explain.”
Resigned, he nodded and moved just enough to loosen the grip on my hand.
Not my dagger hand, but the one between us that he’d pressed to my bosom. I pushed my fist through his hand, up in a short jab to his larynx. He jerked back, howling, and his blood spattered my face, warm salt on my tongue. I pulled my dagger hand free and plunged the knife into the only target I could reach, his muscular shoulder.
The knife stuck and I had no time to tug it free. I yanked away. He grabbed my ankle and I stomped down on his wrist with my boot and ran.
Straight to Fiona, who waited right there, thank Moranu.
The dogs gave chase and I couldn’t separate their excited barks from the man’s angry howls. I heard him ordering them to stand down, as if they’d understand his words.
I scrambled onto Fiona, expecting the sharp bite of the hounds at any moment, but they only spun around my horse, sniffing and yipping. I dared to look for the man.
He knelt in the grass, rage, pain, and blood distorting his fine-boned face, black hair a wild cape around him.
“This isn’t over between us, Andromeda,” he punched the words at me through his pained throat. “Don’t think for a moment that you’ve escaped me. I am your fate. I have the taste of your blood now. Run now if you’re afraid, but I will come after you. I will always find you. You will be mine.”
“Never!” I shouted at him.
“Always.”
It sounded like a vow.