On the Perils of Creativity 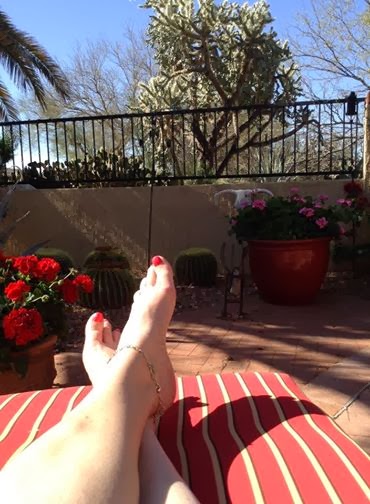 In the slang sense of the word. As in fried, cooked through, no juice left.

And not from a sunburn either. Yesterday, I spent the day in the sun, reading. I didn't work at all.

Which is noteworthy, because I'm not sure when the last day came about that I didn't work on a draft or edits or a blog post or household chores or work on one of my volunteer activities. I didn't go anywhere. I sat and read. Not for contest judging, either.

On Friday morning - right on schedule, I'm proud to say - I finished the draft of Rogue's Paradise. And, you guys, I know this is bragging, but I think it's oh, so yummy. Finishing a book always takes so much out of me, in ways I don't quite understand. I know I've written about it before, but it's like putting the seal on the story somehow carves a chunk out of me on some metaphysical plane.

The scientist in me gets all irritated when I try to describe it.

The creative part knows it's true.

Last night, we watched a segment from 60 Minutes that Stepdad Dave recorded. They replayed a 2008 interview with Phillip Seymour Hoffman, as part of a reflection on his recent and tragic death. The interviewers gave him a little shit about how he was dressed - scruffy - and the interview circumstances - 8 am on the deserted NYU campus - and he responded with that self-effacing, yet wry intelligence that seemed so characteristic of him.

At one point the interviewer quoted one of Hoffman's friends who said something along of the lines of that Hoffman always works himself into a frenzy of self-doubt and obsessiveness, trying to make ever role perfect.

Hoffman looked away, abashed, said, "He talks too much." Then he looked back at the interviewer and said, "You always worry, that this role will be the one to end your career."

After all - it happens, right?

So, it's a bizarre kind of comfort to hear someone else give voice to that. To share that pain of being creative for a living. Which is something I rarely do - share in that community.

Which made me think about why. I came up with a few thoughts on this:

2) At the same time, hearing creative people talk of their struggles or reading studies of how creative people behave, hits home with me in this profoundly visceral way. It's good for me to know that being creative is such a huge part of my life now and drives much of my behavior and energy cycles.

3) There’s a kind of desperation that arises from making one's living via a creative act. Maybe it arises from the certain knowledge that the art is not ours to control. It’s a gift that comes from elsewhere. We can create the rituals and habits to facilitate the flow – but ultimately, the art is beyond us. In this way, we are forever on the edge, at the mercy of a greater power.

4) I think sometimes of Geoffrey Rush’s performance in Shine, and how the musician ultimately lost his mind trying to play that one Rachmaninoff piece. When I’m finishing a book, I am stressed and I do feeling like I’m losing my mind. And the people who love me become concerned and remind me to care for my health. Which I try to pay attention to. At the same time, I’m looking at this chunk of my heart I’ve torn out and painted into a story and wonder how anyone thinks I can do what I do without this gradual cannibalization of myself as a human being.

The scientist is rolling her eyes at that last one.

And this is something of a vomit of ideas. I should massage it more, but I'm not going to. I thought about holding off and writing something else today, until this gelled more - but when I saw "crisp" was the word of the week, this was what I thought about.

So, here's my mess of thoughts. Now I'm going to go have brunch in the sun and maybe have a mimosa.

You all have a lovely Sunday!