Why Eve Dallas Is a Feat of Literary Craftmanship 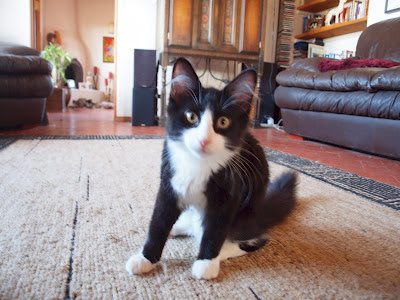 I notice a lot of my photos of Jackson, the New Kitten, are not crisply in focus. This is because he's moving. All the time. And he's fast, too.

It seems I get asked fairly often which are my favorite fictional characters and, more interestingly, which I wish I'd created.

It's tempting to come back with the flip "Harry Potter," because wouldn't it be fun to author books that become a phenomenon like that? And not just for the money, though that would be fun. Creating a character who becomes an icon for so many, generating that much emotion and imagination in people. That would be immensely rewarding.

But then I think about all the characters who've become important to me over time, the ones who've lived in my head. There are those I've loved like friends - and I could easily wish I'd written them. Though, truly, they'd feel no less real if I had.

Instead, I'm coming at this from a purely craft point of view. The character I really wish I'd created? Eve Dallas.

For those who don't know, Eve Dallas is the main character in J.D. Robb's "In Death" books. Robb is, of course, a pseudonym for Nora Roberts. Now, Nora is clearly a master of her craft. She's written 200 books as of April 2012 and every book she's written since 1999 has hit the New York Times bestseller list. She's amazingly prolific and manages to produce high quality books.

(Okay, yeah - there's complaints that her contemporary romance trilogies are feeling increasingly phoned in. I think her heart isn't in them anymore.)

Nora wrote the first of the In Death series in 1995, which was originally meant to be a trilogy. SEVENTEEN years later, the 34th book in the series came out in February. I believe this is startling longevity is attributable to Eve being such a strong and fascinating character.

(Yes - I hear you out there! Of course her husband, Roarke, is amazing and wonderful. Over and over he's picked by readers as favorite romance hero. Eve and her stories wouldn't be who and what they are without him. But I still argue that the books are really about her and her emotional journey.)

Eve is a homicide detective in New York City in the late 2050s. She's a product of horrific childhood trauma and her name is essentially the "Jane Doe" that child services gave her. To redeem her past, she fights for justice for murder victims. Each book is structured around a murder mystery, but the overall arc is about Eve, her slow emotional blooming with Roarke, and her gradual accumulation of real friendships.

I freely admit that I'm addicted to the series, but I also buy each new release to study just how she does it. It's not easy to maintain the sexual and romantic tension in a long-established couple. And posing fresh new challenges for a heroine, to continue to coax interesting growth, is a feat few authors can accomplish. Nora has managed to keep from going off the deep end of more bizarre/more extreme that tanks so many other long-running series.

So, do I wish I'd created Eve Dallas? Hells yes. I'd love to have writing chops like that.