Hit Me with Your Best Shot 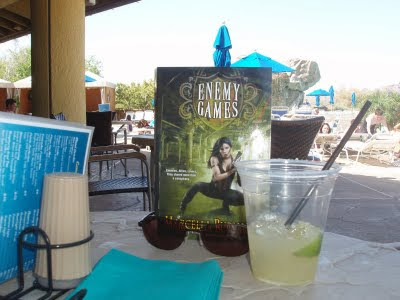 Here’s Word Whore, Marcella Burnard’s, new book hanging out at the pool bar with a margarita, looking sexy. Enemy Games, sequel to the fabulous Enemy Within, comes out on Tuesday. Kidnappings, xenobiology, sex, romance and insect alien life forms – I know you can’t wait to get your hands on it. Like I have.

Enemy Games has been traveling around with me this week, joining me and the man on a little road trip from Santa Fe to Phoenix to Tucson and thence to the beach in San Diego. Tune in on my personal blog tomorrow for more of our young book’s adventures.

Yeah, she turned a lot of heads, everywhere we went.

I remember quite clearly the first time I was hit-on. It was one of those vague drive-by styles. I was maybe twelve or thirteen, walking down the sidewalk, when a group of guys in a car hooted at me and yelled those incomprehensible things guys shout at girls that they seem to think will make us take off running after them, desperate to jump in the car and LOVE ON THOSE MENS.

I mean, they must think something along these lines, right? Else, why bother to whistle, howl or hoot?

I remember being surprised because I really didn’t see myself as hoot-worthy at that point in my life. I barely had a figure, was teetering on the edge of learning to be passably cute while balancing childish habits with new adult interests and desires. I couldn’t imagine what they’d seen to move them to howl approval. I was also a little pleased along with the embarrassed. Even the wolf whistle is flattering, on some level.

Since then, I’ve learned that it never matters how I look. I can’t recall a time that I’ve been hit on when I thought I looked hot, much less when I wanted to be. No – instead I am most frequently hit on at the grocery store, usually when I have on sweats and no make-up.

I mentioned this phenomenon to a few women and they agreed – they get hit on most often when they look like hell, in odd locations, like the local 7-11.

It’s notable that, in romantic comedies or romance novels, the romantic partners almost never meet because one hit on another. Or, if they do, there’s some kind of twist to it.

I’m not sure it really works all that often.

Email ThisBlogThis!Share to TwitterShare to FacebookShare to Pinterest
Labels: being hit on, Jeffe Kennedy, Marcella Burnard