The Books That Sent Me Down This Path


This week's topic in the soon-not-to-be-a-bordello anymore - new title and contest winner to be announced soon! - is the book(s) that got us started on our genre.

This is always a hugely difficult question for me to answer because it feels like squeezing decades of reading into less than a thousand words.

Probably because that's exactly what we're trying to do.

But I'm trying this topic's particular focus on which books really sent me towards my niche genre of fantasy romance. I've discovered an interesting trend through this reflection on my past.

A bit of history first. I trace my decision to become a writer to November of 1991. This is easy for me to look up, because my epiphany hit in the middle of the annual meeting of the Society for Neuroscience in New Orleans. (They have a convenient and nicely organized sidebar of past meetings that I check any time I need to confirm the exact date.) Actually, as epiphanies sometimes do, mine came in the form of a complete meltdown, in which I burst into tears in front of my PhD adviser and ran from the building.

At this point I discovered that pursuing my life's ambition should probably not make me that crazy. And that maybe what I really wanted out of life was something else entirely. To my vast surprise, it turned out that the "something else" was to be a writer.

During that convention I was reading Anne Rice's The Witching Hour. I remember it vividly because my mom, who went with me to that convention, was reading it also. We even hunted down the house in the story and discovered Anne Rice actually lived there. I'd been a fan of Rice's since I received a copy of Interview with the Vampire in my Science Fiction Book Club shipment. This book, though, it wrapped me up, masticated my heart into tiny pieces and tucked them back inside me, totally changed. Yeah, I was already an emotional wreck - a lot happened to me that year, including meeting David, who turned out to be the love of my life - and that book was part of it.

It planted the seed of what I really wanted to write, without me even knowing it.

Because I'd *always* loved to read anything paranormalish. From the time I picked up Anne McCaffrey's Dragonsong in 5th grade - not coincidentally the same year I read Interview with the Vampire - I consumed everything along those lines that I could find.

Two things, however, kept me from writing in that genre at first. Actually, I should say publishing. I did start writing this fantasy THING. It involved terrible fragments that went nowhere because I had zero craft or support in that direction. This is key, I think. My first publication was an essay, in 1997, and I came to write it because I took a class called Essays on Self and Place in 1996.

Note how many years it took me from epiphany to publication.

So, because I didn't know anyone who wrote genre, and there weren't visiting writer classes I could take in it, I didn't get focused on writing fantasy. Also, being in an academic environment, I thought I needed to write "important" things, not genre.

But all during these years, that's what I was reading. It's interesting to review the books and series that pop into my head as formative - and then see the progression of dates. I've added them in as captions so you can see, too.

This is by no means an exhaustive list, but I *did* become an exhaustive reader. I didn't read all of these exactly when they came out, but pretty damn close. I haunted my local Hastings Book Store (because the indie book stores didn't carry genre), which had a rack of these books. I picked up Jacqueline Carey's Kushiel's Dart based on the cover and started in on Anita Blake because a colleague and similar fan of romance/paranormal crossover recommended them. And we'd both glommed onto Diana Gabaldon's Outlander books.

A couple of things happened in the early 2000s. "The turn of the century" I liked to call it, but nobody thought I was funny. My first collection of essays (Wyoming Trucks, True Love and the Weather Channel) came out in 2004, to critical acclaim and practically zero income.

Also, I became very aware of my unadulterated addiction to a number of series. I spent vast amounts of money on my autobuy books - JD Robb's In Death books, Gabaldon, Carey, Laurell K Hamilton and a few others. A good friend who'd begun to manage one of the local indie bookstores - and who was savvy and unpretentious enough to recognize book buyers like me - fed my addiction. She knew when my next autobuy book was coming out before I did and would have it ordered and waiting for me.

Of course I couldn't resist.

Then, one day, she handed me Twilight. I wasn't interested. She said, no, really - my editor friend in NYC said she just spent the weekend reading this book and was spellbound. My friend thought I should at least read it, because early indicators were that it would be big. Then she asked me why wasn't I writing this kind of book, as much as I loved them.

At least I didn't cry that time.

But it was a second epiphany. I dug out those horrible fragments and began to play with them. It took several more years - and a lot of learning the craft of both writing novels and learning genre - but here I am, with my books right in there. 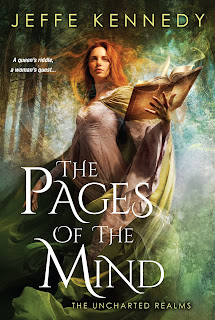