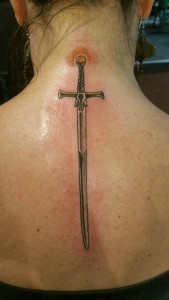 To celebrate that THE TALON OF THE HAWK won Best Fantasy Romance of 2015 from RT Book Reviews, I got this amazing tattoo of Ursula's sword. I'm thrilled with how it turned out. (Freshly finished and a little red here - it looks even better now!)

If you haven't yet signed up for my newsletter, one went out today with an exclusive, never-seen-elsewhere, juicy deleted scene from TALON. If you sign up today, you can still see it. Yes, I'm totally luring you. Is it working?

You'll see this in the newsletter (hint, hint) - Kensington is sponsoring a Goodreads Giveaway of 25 copies of THE PAGES OF THE MIND. Hie thee hence to enter!

This week's topic in the Bordello poses the question of whether book contests you pay to enter are immoral or unethical. I confess that this was a topic I suggested, so it works out well for me to kick off the topic this week. I'm posing the question to the rest of the Word Whores and I'm really interested to hear their answers.

Allow me to explain a bit.

I entered the fiction-writing world via Romance Writers of America (RWA), and the highest award there is the RITA. It's essentially the Oscar of the romance-writing community. There's even a golden statuette! The RITA is open for anyone with a published novel or novella to enter. The author (or publisher) pays $50 and provides five paper copies of their book. Judges are sent packets of usually six to nine books to read and score, and the top scoring books are the finalists in their categories.

In contrast, the Science Fiction and Fantasy Writers of America (SFWA), which I joined later because their membership requirements are stiffer, have the Nebula Awards. To have a book nominated, it must be first put on a recommended reading list by SFWA members, then nominated by a certain number of those members, with the top contenders becoming the final nominees. (The nominees don't HAVE to be on the reading list first, but it helps.) The salient point here is that authors cannot enter their books - they can only provide copies for the reading list. The Hugo Awards for science fiction, fantasy and horror work much the same way, with "members" of the WorldCon convention that year nominating and voting.

What came as a surprise to me was that it came out in conversation with other members of SFWA that they look down on the RITAs for being "pay to play" awards. They see the Nebulas and Hugos as having greater integrity because the authors cannot enter the books - someone else must nominate them. However, to me this feels like a perpetuation of cliques and old-boy networks, with certain authors always nominated while others are overlooked for various reasons. Also, as we've seen with various scandals like Sad Puppies, these awards are subject to slate-stacking for various political purposes.

The RITA system, however, is far from perfect also, with bias against authors who cannot afford to enter and judges reading subgenres that are not ones they necessarily love. However, I do like that I can at least enter my books in the RITAs, even though they have yet to final. I suggested that SFWA entertain the notion of a new award where authors could pay to enter, which would be an excellent fundraiser - RWA made upwards of $100,000 on this year's contest - and was met with withering scorn. I'm not kidding. The phrase "withering scorn" was used in comment responding to my suggestion.

This is how strongly some members of SFWA feel.


So, I'm curious - what do you all think of this issue? I frankly don't get the withering scorn, but is that just me? Feel free to comment! And I'll be following with interest this week to see how my Bordello-mates weigh in.