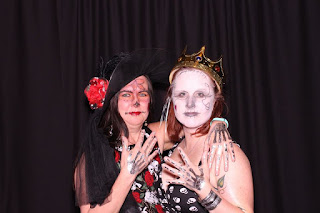 Megan Hart and I at the Day of the Dead mixer at the Coastal Magic Convention. Those skeleton hands temporary tattoos were super cool - and hell to get off again. Oops.

But I'm here today to talk about virtual communities and circles of social media hell. Which do I pick as my current #1 Social Media Sin?

I'm on a number of email loops, most of them various author groups. Some are authors who all write for a particular publisher, some are RWA chapter loops, some are loops for group blogs. They range in size from maybe a dozen members up to probably 500 or more for one of them. But the point remains that all of them are specific-purpose loops, for authors to interact.

And some people can't seem to get past sending emails about their latest blog post, book release or what-have-you to these loops. One gal is on three different loops with me, so I see her send several-weekly blog post announcements to all three loops. Over and over and over.

So, let's talk about why I'm sending her to this circle of Social Media Hell to be punished for eternity or until she reforms her ways. (Guess which outcome is more likely?)

Problem #1 - She's pinging the same finite audience with promo messages, over and over.

Pretty much only the people on that email loop will see the message. The exception would be if someone forwards a message off loop, which is usually against group policy and they're unlikely to forward your promo anyway. She must feel like she's accomplishing something, but she's broadcasting to the same people all the time. This is not building engagement. It's returning to the same billboard week after week to slap up a flyer in a slightly different color and leave again.

Okay, she's irritating me. But I've heard other people mention her practice on this, too. Since these missives are pretty much the only things I hear from her - because I never click through to her blog posts - my entire association about her now is a sense of irritation. Sure, it's easy to delete and I do, but every time, a bit of that irritation builds. And it's not making a pearl, I can tell you that.

Problem #3 - She's talking to other authors, not to readers.

So, yes - authors are also readers. But we're not on those loops as readers. We're there to talk about our common profession, not to sell books to each other. I know a lot of you who read this blog are authors, particularly posts like this, which are more about author practices. But I'm talking to you about author things, which theoretically helps my overall reputation. I'm not yammering at you to buy my books. This is really key - know why you're talking to what group.

Nathan Lowell is a newish friend of mine and has really smart things to say about marketing. One of the points he's made is that social media is about engagement and influence. It's a DIFFERENT kind of marketing than traditional advertising which works by way of broadcasting. A cereal brand puts commercials on TV or puts up billboards in the hope that a certain percentage of people who see those ads will respond by buying the product. Effective social media, however, is about creating communication with people who want to hear your message. Ideally everyone in your network who receives your message is someone who has opted in and is happy to hear it. Not irritated. (See #2.)

Problem #5 - She's oblivious to the purpose of the email loop.

By sending her blog post messages to the group - especially the same one to multiple groups - she's effectively telling us that she doesn't care about us or our common profession. She's making it clear that she's there to promote her career, not to form relationships with us or offer her expertise. She's telling me that she's not my friend. Which makes me feel like I'm not her friend either.

I've picked on one particular example here, but the principle applies to all interactions on email loops. They are not your street team or newsletter subscribers! If you abuse your email loops, then yes - you will find yourself in the circle of Social Media Hell that I rule. My demons will bombard you will email messages until you weep for mercy.

Until you promise to mend your ways.

Now, go forth, my people and pay attention to who you're emailing and why.