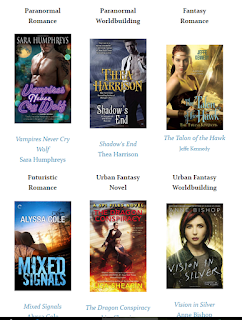 So... this happened last week, but I hadn't shared here yet. THE TALON OF THE HAWK won Best Fantasy Romance of 2015 in the RT Book Reviews Reviewers’ Choice Awards!!! Look at that amazing company. I'm just thrilled that this book won. Not only because, well - winning! - but because this particular story really gutted me to write and remains a special book for me.
This week's topic in the Bordello is Long Term Plans - when to stick to the script, and when to deviate.

I'm going to tell you all a story. This should come as no surprise.

I should caveat that I have a precarious relationship with long-term planning. I absolutely believe in having a vision for my life. I have many long-term goals - they're simply not tremendously detailed. Those deals where you lay out one-year, five-year, ten-year plans? Mine tend to be along the lines of "visit Maldives, snorkel at Lord Howe Island and be BFFs with Tina Fey." I am decidedly NOT the person who sets salary goals, etc. I've tried. It doesn't work for me.

David and I have been dealing with a THING these last weeks. It's not really about us, but it's impacted us both on profound levels. A few years ago, David's brother (who I'll call R for privacy) was diagnosed with lung cancer. A really bad kind. The news hit David particularly hard as it came not long after their father died. A couple of weeks ago, we found out that, after years of treatment and remission, the cancer was back and it didn't look good.

I haven't seen David cry many times, but this was one.

This threw us into a limbo of uncertainty. R was hospitalized a good thousand miles away from us, in a part of the country where it's both ridiculously complicated and outrageously expensive to fly. This means a thirteen-hour road trip. Moving to Santa Fe has come with this price for us. We're no longer a two- to four-hour drive from family. We agonized over what to do. David spent a lot of time on the phone with his other brother and one sister, along with our son, daughter and daughter-in-law. Plans were made and discarded any number of times. We made decisions and changed them as the news changed. David wanted to see his brother, but the brother would be in surgery, or too out of it to see anyone.

This ever-changing window of opportunity, a moving target at the end of a road trip that would consume at least three days, maybe more, was further complicated by a planned trip to Tucson Festival of Books, an eight-hour drive in the other direction. I'd cancel if I had to, but it was a huge professional opportunity for me - I was on a panel with Terry Brooks! - and it was also my mother's birthday. In addition, David just started a new job in Socorro, NM, about two hours south, in an acupuncture practice there. Newly made patient appointments would have to be canceled. We'd make the sacrifice without question, but only if it made sense to do so.

Finally the brother said he most needed to be left alone and not be bombarded with company and we respected that.

We went to Tucson last weekend and it was even better than I'd hoped. Everyone I met was wonderful. And Terry Brooks, one of the most gracious superstar writers I've yet met, read reviews from THE PAGES OF THE MIND to the audience before the panel started and gave me the most incredible boost. David and I had a lovely weekend enjoying the Tucson sunshine. News was that various surgeries had gone well, so all seemed well.

This last Thursday, David was in Socorro when we got the news that all was NOT well - the doctors gave the brother days to live and he was being sent home. Again we made massive plans. David would be back in Santa Fe by midday Friday, we'd drive up to Denver, pick up our daughter and grandkids, drive up to Cheyenne, stay the night with David's sister, then all make the final trip to northern Wyoming. Then a major winter storm hit Colorado on Friday, dumping heavy snow from border to border. We revised the plan to leave super early Saturday morning.

Now, I had tickets to see Amanda Palmer in concert Friday night at the grand opening of Meow Wolf, George R.R. Martin's art complex. I'm one of her patrons on Patreon, so I knew she and Neil Gaiman, another of my writer idols, had been in Santa Fe for over a week. She'd done a Q&A for patrons on Sunday night, but alas - we were in Tucson. When we decided to head to Wyoming on Friday, I scrapped the concert plan. I was going to give them away, but I couldn't find the email. When we scrapped that plan to go early Saturday, I didn't even think about the concert. Staying up late was the last thing we needed and, while I really wanted to meet Amanda, I was ambivalent. The timing felt bad, it seemed unlikely I'd get to talk to her at a gig like that, and the whole meeting-your-heroes thing. I'd had a great experience with Terry Brooks and didn't want to ping the universe for too much, you know?

So we went to bed early, and David and I got up at five am Saturday morning (yesterday), ready to be on the road by six. We turned on our phones to find voice messages that David's brother died during the night. His other brother said we might as well hang tight for funeral plans.

At a loss, up far too early, already caffeinated with no particular plans, we hung around for the morning. It was good, actually, to simply rest. David talked with family a lot. I read a book. I told David anything he wanted to do with the day was good by me. He suggested we go have lobster pizza and wine in the sun at Rooftop Pizza, raise a glass to his brother, and celebrate life.

We headed into town and the historic plaza was mobbed on this beautiful spring break weekend. Our favorite parking lot was full, as was our second favorite. Between the tourist drivers and pedestrians, it took a long time to wend our way back around. Then we nabbed a meter spot a few blocks away - hooray! - and walked to the restaurant. As we approached the street corner where there's this little courtyard area, I saw a redheaded woman changing a baby's diaper and singing.

We continued to cross the street, but I said to David, "I think that's Amanda Palmer."

I wasn't uncertain if I should go say hello, but David talked me into it, saying I'd regret it if I didn't. We crossed back. She'd just finished changing the baby and handed him off to a sunbathing guy who I knew must be Jason Webley.

I said, "Are you Amanda?" She smiled and said yes and I told her I was one of her patrons. She asked if we came to the concert last night and I said no, that we had tickets but... And in there she asked for our names. David had been hanging back, as he figured this for my deal, but I had the strange urge to explain, so I introduced him and said that his brother passed away that night so we didn't make it.

She was genuinely stricken and asked David it was unexpected and he said cancer She told him she'd just lost someone to cancer and that it was the anniversary of her brothers death - and she hugged him, long and hard - like a full minute. It was extraordinary because David doesn't like hugging strangers, but they connected in this and his whole body softened with the shared grief. And it hit me that he'd needed this.

Then we talked about death a little, and how David and I were going to eat lobster pizza and drink wine in the sun. She said that was the perfect thing to do. It was kind of surreal and awesome.

By the time we got up to the balcony a few minutes later, she and her friends had moved on. Our timing had been serendipitous.

You all know how I feel about serendipity.

So all of this is by way of explaining why I'm not much for long-term plans. I'll make them - but I'll also discard them in a flash, because some of the best moments come as gifts from the universe, bestowed on a schedule not our own.

As we ate lunch, we talked about how this is a wonderful thing about living in Santa Fe, that we could run into Amanda Palmer on a street corner. And David said, "now you just need to make Tina Fey be your friend."

Totally in the plan! 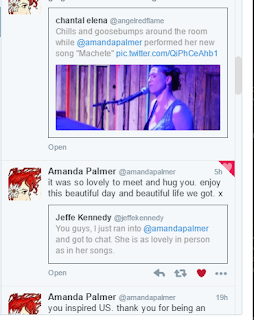 And always in the plan to savor this beautiful life we've got.