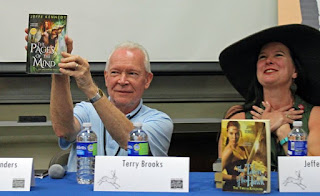 Wow, I go to the Tucson Festival of Books and my shoes are all stretched out, chopped-off toes strewn around my closet floor, and KAK and Jim toss up amazing bits of flash fiction that set the bar really damn high.

I did get to be on a panel with Terry Brooks, however. And I may have squealed unbecomingly when he held up my book and read reviews from the front. Forever thanks to faithful reader Lynne Facer for grabbing this truly epic photograph.

And now, my contribution to the week's flash fiction challenge, filling in what happens during that hour we lose by springing forward.


Too restless to sit, he paced a tight circle around the park bench, checking his watch yet again. Not quite yet 8 a.m., so he shouldn’t be impatient for her arrival.

Still, he couldn’t wait to see her again, to see her beloved face, to tell her he finally understood what she’d tried to explain in all those arguments, both shouted and hissed. Since receiving her note, he’d practiced all the apologies, the promises to change. He would do it, for her.

This early on a Sunday morning, very few other people graced the park, so he’d see her arriving from a ways off. He recited his resolutions again, in time to his footsteps, shushing through the damp grass.
I’ll change. I won’t be a Luddite. I’ll get a smartphone and learn to text. Computers aren’t evil, only the way they’re used. I won’t be jealous of your social media friends. I won’t tell you only paper books are real.

The watch hands ticked into place, 8:00, on the dot. Any moment she’d arrive. Even if she was late, he wouldn’t say anything. He was a changed man and could learn to live with her lack of punctuality.

You’d think, though, that for such an important meeting—one that she arranged—she would have made extra effort to be on time. That just showed respect for each other. If she didn’t spend so much time looking at her phone, chatting with people who weren’t even her real friends, she wouldn’t run behind. He loved her and he was real, flesh and blood. She should value that.

8:05. Officially late. Tamping down the irritation, he reversed his circles around the bench. Here she’d said she’d only give him fifteen minutes for the apology he’d beseeched her to accept and she’d blown five of them.

8:07. Edging into irresponsible. Couldn’t she understand how it hurt him for her to abuse his time this way? He didn’t ask so much. The careless bitch. Probably reading one of her trashy ebooks and forgetting all about him.

By ten after, he began to question if he had the right day. Fishing the note out of his pocket—on fine stationery, even, proving that she’d considered his sensibilities—he read it for the hundredth time.


Dear Steve,
Yes, I have received all the letters you sent me. I feel like you’ve already apologized, already made all the promises. We’ve been around this block too many times to count. I loved you—maybe I still do—but we’re simply not compatible. You’re an old-fashioned guy, which is okay! But I’m a modern woman who works in tech. I can’t feel bad about who I am anymore.
Still, because it means so much to you, I’m willing to see you one last time. Meet me Sunday morning, March 13, at 8:00 a.m. I promise to be on time if you will. But I’ll only wait fifteen minutes. I strongly advise you to carefully check the time.
With hope,
Julie

8:15. She hadn’t shown. Irritating that she’d advised him to carefully check the time. She knew he did, ritually winding his grandfather’s watch every night before bed. Setting the alarm on his mechanical clock, the sound of ticking minutes a comfort through the night, though she had complained of the noise. She who slept with that blasted phone on her nightstand.

Fuck her anyway, that she’d taunt him this way. Whether she forgot, overslept or was simply paying him back for all those imagined insults, he didn’t care. She was too picky. Completely selfish and self-absorbed.

He couldn’t believe that she’d done this to him.

I promise to be on time if you will.

He held the watch to his ear, the ticking reassuring him that he was in the right. He’d been on time and she hadn’t.

The jogger grinned. “Time change. Spring forward. We lost an hour.” Speeding up, he disappeared around the bend.

I strongly advise you to carefully check the time.