When My Creativity Needs a Kick in the Ass, I... 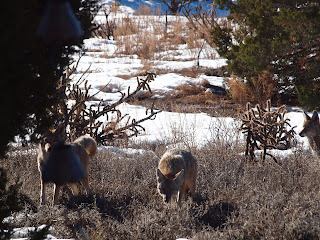 We had some coyote visitors the other day. I took this through our glass front door. They look happy and healthy!

This was an interesting topic for me to contemplate, largely because I don't really regard myself as a creative person. People react weirdly when I say that. I mean, I know that writing is a creative process. Hell, it's called "creative writing," right? But maybe it's all those years of scientific training and working for an environmental consulting firm. Scientists for the most part don't regard themselves as creative.

To be fair, maybe they aren't.

One of my all-time favorite teachers, the late Professor David Hadas at Washington University in St. Louis, looked at creativity through a spiritual lens. He taught religious studies (my other major, besides biology) and was my honors adviser, so he had a profound influence on me. He once told me about a public appearance he did, discussing how creativity is an expression of the soul, of transcendence. (He called himself a non-practicing Orthodox Jew, which is a joke you may or may not get. Suffice to say, he had a fairly non-denominational view of concepts like the "soul.") At any rate, at this event, he'd explained that creativity took effort, not unlike disciplined religious practice, and that not everyone could do it by any stretch. This one guy said, "I don't know - I like to think I play a pretty creative game of tennis." In relating this story, Professor Hadas said, "See? He was so desperate for some connection to creativity that he grasped at straws."

He told me that story probably twenty-some years ago. Funny that it came back to me now.

I suppose it floated up in my head in response to me asking myself what I do to boost my own creativity. For the most part, being creative feels to me like getting out of my own way. When the writing feels best, it's like taking dictation from elsewhere. The things I love best in my books - and interestingly that readers point out as their favorites - are all elements that stream in unexpectedly from elsewhere. I think Professor Hadas would say that's connecting with the divine.

I'm only just realizing, in writing this, how much of my ideas about writing come from what he taught me.

At any rate, this is what I do if I'm feeling like the words aren't flowing:

Because I feel like the words come elsewhere, very often I find that the act of writing allows the creativity to flow. So I keep typing away, pushing at the wall until I break through.

If I can't break through that wall, sometimes it means I need to take some time away. That might mean work on something else, it might mean doing some manual task like gardening, to let my brain recover.

Probably because I got my ideas about creativity from Professor Hadas, I revert to concepts I learned from religious studies, about clearing the mind, meditation, and focus. Noise of any kind interferes with that - internet, TV, worries - anything that keeps the mind from being like a still pond. So I turn everything off. I might meditate, I might do some Tai Chi. Whatever it takes to eliminate the chatter.

Enjoying someone else's art can stimulate my own enthusiasm again. I'm lucky to live in a beautiful place with tons of wonderful art. Sometimes I go look at the galleries, or just stare out at the view.

It's easy to get very serious about a story - especially during dark moments in the book itself - and forget the joy. But creating something should be joyful at its core. If I'm not having fun, I know it's time to take a step back and try steps 2-4.

Looking forward to more great tips on this from my sister and brother whores!