Writing to the Market - Is It *Always* Anathema? 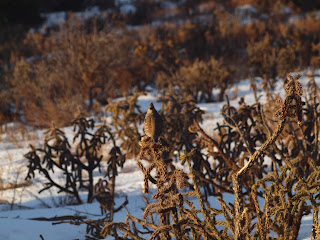 This is like one of those "Can you spot the X?" photos. Can you spot the quail in this pic? While the others in the covey are scratching around and eating, one will get in a high spot and be the lookout for predators. At first I thought I hadn't gotten a good photo - several were out of focus - and then I zoomed in and wow!

Love how he's looking right at me, too. 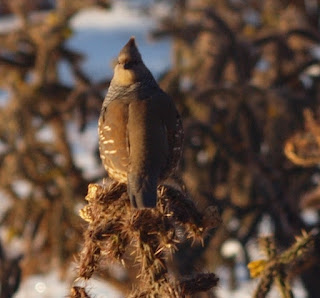 Our topic in the bordello this week is when should you write to the market?

Which is an interesting question, really. That's a hugely common piece of advice, to NOT write to the market. The reason for this is because if a writer targets a book for what's hot RIGHT NOW, then by the time the book is written, revised, polished, sold and published, that will be what was hot a year ago at best.

Of course, this is advice is predicated on two ideas. 1) Writers are slow and it takes a long time to write a novel, and 2) that the book will be traditionally published which has very long lead times.

With the advent of digital and self-publishing, the long lead times are no longer the rule. Sure - if a writer goes for a traditional publishing contract, with paper copies to be produced, that can go a year or two out. But a digital publisher can turn a book around in a few months - and the self publisher can put up a book as soon as it's edited.

And I think we know that not all writers are slow. That's a false construct, in my opinion, but also a whole other topic.

So, all that said, if you write fast and can self- or digitally publish, why not write to the market?

Well, lots of self-publishers do that very thing! In fact, in one group I belong to, writers talked about scouring the top ranked books on Amazon and copying the premises of the ones selling well. They'd write their own version and put it up within weeks, capitalizing on that popularity. I have no idea how well that works for them, but people are sure doing it.

I also stopped going to that group, in part because of that conversation.

Let me first say that I'm not one of those who decries "selling out" or who thinks art should be done for its own sake. I think artists of all types should make money and be able to make a good living. I like money, and having things like food and a nice place to live.

That said, I also believe in the story. I often say that there are easier ways to make a living. If I'd wanted a direct path to wealth, I would have majored in finance and become a stockbroker. Lots of my friends in college did and they made heaps of money.

I wanted a different kind of life. I wanted a career where I felt I was contributing both something valuable to the world and feeding myself as a human being.

(I'm not saying stockbrokers don't feel their careers do this. For all I know, they do. That kind of thing just doesn't work for me.)

So, while I do consider the market in choosing my next writing project - as in, what I'm pretty sure is on down cycle and would do better for being back-burnered for a while - the idea of copying a premise that's selling well... That goes against my grain. It feels like the opposite of why I wanted to be a writer. I want to tell my own stories, not tweak someone else's.

I dunno - am I alone in feeling this way?

Email ThisBlogThis!Share to TwitterShare to FacebookShare to Pinterest
Labels: Craft of Writing, Jeffe Kennedy, quail, writing to the market