How to Know When to Give Up 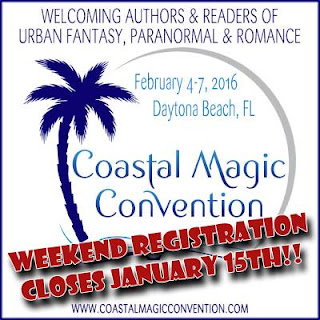 Can't believe it's already time! But the Coastal Magic Convention is only a few weeks away and January 15 is the last day to register. I love this convention and there's going to be tons of great authors, bloggers and readers there - so if you can wrangle it, you should totally join us. Great panels, terrific interactions and it's right on the beach. SO fun!

So, this week's topic is: It's dead, Jim - how to know when a project isn't working vs when its fixable.

I want to tell you a couple of stories.

Back in the mists of time, when I was a baby aspiring writer who focused mainly on creative nonfiction, I helped organize this annual writers' retreat. We brought in some great speakers and one year I drove to Denver International Airport to pick up a guy who was the Editor in Chief of a prominent creative nonfiction literary journal. On the two-hour drive up to Wyoming, we talked a lot about writing, publishing, the industry in general and my fledgling career in particular.

(BTW, this is a great way for newbie writers to begin building industry contacts. Volunteering to pick up or escort visiting agents, editors and established writers gives you time to have longer, more intensive conversations.)

At any rate, one thing this guy said to me was that he felt strongly that some aspiring writers should just give up. It was his opinion that not everyone possessed the native talent to be a writer. He said he struggled as an editor not to simply tell some writers submitting to the magazine that they should give up already and go do something else.

Of course, I obsessed over this, wondering if *I* was one of those people. He'd rejected many of my essays, after all.

The second story happened many years later, after my first book of creative nonfiction was published by a university press. I'd switched to fiction and had written the book that became ROGUE'S PAWN. I shopped that one for a *long* time. Years. I had two friends who were in the same place, shopping their first novels in the genre. One of them hit it - won a contest, got an agent and a three-book deal. The other two of us kept slogging along. One day, the other unpublished gal asked me how long I was giving myself. At first I didn't know what she meant. "I'm giving myself a year," she clarified, "then I'm giving up."

I told her I had no deadline, that I'd keep trying until I succeeded. That response totally mystified her. I think she regarded me as quite foolish.

You know what? She gave up on being a writer. ROGUE'S PAWN ended up being the first of the Covenant of Thorns trilogy and I have in the neighborhood of twenty published fiction works out there.

I realize this is all somewhat sideways of the question - which is when to give up on a project. A lot of authors I know have "under-the-bed" books that they say will never see the light of day.They call them learning books and are happy to let them go.

This is just not who I am. "Stubborn" is one of my defining characteristics, and yes, more than one person has cited it as a character flaw. Including my PhD adviser. He also told me he didn't think I could make it as a writer, when I said I wanted to be a writer instead of a research scientist.

So, all of this is byway of saying that this division doesn't exist in my world. Nora Roberts rather famously says she can fix anything but a blank page. I agree.

Never give up. Never surrender.

Email ThisBlogThis!Share to TwitterShare to FacebookShare to Pinterest
Labels: A Covenant of Thorns, Coastal Magic Convention, giving up, Jeffe Kennedy, Nora Roberts, Rogue's Pawn, under-the-bed novels, When to Give Up on a Story