Of Hamsters, Pantsing and Becoming Creative 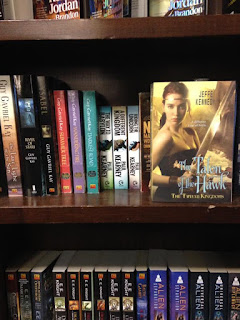 I still get a total thrill when people send me pics of my books on the shelves. Maybe one day I'll get over it, but not so far. Could be I'm getting tiresome about it because I showed my mom a pic on my phone that someone sent and said, "photos like this make me so happy!" And she said, "I know," in that *tone* people get, like when you've said something too many times.

But, hey. Look! Me and Guy Gavriel Kay!

So, yeah, I might be also stalling a bit. Whenever I see topics like this week's - Spinning Plates and Weaving Subplots: How do you decide how to balance the main story and the connecting tales? - my brain goes a little fuzzy. In fact, as soon as I see anything in the realm of "how do you decide..." the invisible hamsters in my head start frantically scratching at the inside of my skull.

But I really don't want to write another post that's all an elaborate way of saying "I DECIDE NOTHING, PEOPLE. THE HAMSTERS DECIDE EVERYTHING AND I WRITE IT DOWN, OKAY???"

Instead I'll try to explain myself and why I have the process that I do. Besides the fact that I think every writer has her own process and that it's key for all of us to learn what our process is and own it. A lot of writers - both established and aspiring - spend a lot of time trying to alter their process. They want to write faster and better, which is admirable, so they try all kinds of things to make that happen. While I see people able to tweak and refine what they're doing, I rarely see anyone completely convert their process. Most of the time, I see writers completing the cycle with increased understanding and ownership of how they do what they do.

For my part, I've never really tried to change my process. Which means, when I tell people that I try to pre-plot, I'm kind of lying. I mean, I have tried - but I immediately give up, as it gives me that hamsters-scratching-at-the-inside-of-my-skull feeling.

I don't think I need to say it isn't a pleasant one.

Some writers whose methods are more like mine - the pantsers or the misters or the gardeners, or whatever analogy you prefer - say that it's more fun to discover the story as they write. I'm not sure I agree. It makes for angsty, difficult writing days, more often than not. There's a thrill when something falls into place, yes, but "fun" isn't really the right descriptor.

What it is, though, is fulfilling.

There's this whole debate about being happy versus living a rewarding life. I'm a big fan of pursuing happiness, but I'm also a believer in growth.

I often say that, if I wanted to get rich easily, I'd have become a stockbroker. Don't make that face - I'm good with numbers. It could have happened... But the whole reason I became a writer (which is kind of a long story) is because that was the answer when I asked myself what the most rewarding life would be for me. That's why I bailed on being a research scientist. When I committed to being a writer, I studied how other authors do it, particularly the ones I admire most. I wanted to know how they developed their creativity. I'd been so immersed in science that I felt like I didn't know how to be creative. I didn't so much ask the question writers hear so often - "where do you get your ideas?" - as I asked "HOW do you get your ideas?"

At the same time, I was studying Taoism. Really, I have been most of my life. I read the Tao Te Ching in high school and my honors thesis in college (for my other major, religious studies) compared the Tao Te Ching to a sermon by Meister Eckhart. But, when I made this huge choice to alter my career path and become a writer, I was with a kung fu school that emphasized spiritual and mental growth by channeling the subconscious. Taoism is a very individual philosophy, one that encourages this kind of focus on personal growth.

All of this is a long way of saying that I wanted to develop a writing process that channeled the subconscious.

THAT, more than anything else, is why I don't "decide" much about my stories. Instead I try to create a still space in myself, open a door and allow the story to come in. Some days it works better than others. Some days it doesn't work at all, which is agonizing. Other days the rush of being filled with a story from somewhere outside myself is an ecstasy unlike any other.

So, "fun" is really not the right word at all.