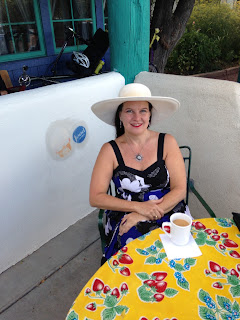 Thanks so much to Jim for pinch-hitting for me yesterday! He graciously stepped up when David, the love of MY life, surprised me with breakfast out and a trip to the botanical gardens. I didn't want to say, "but... but... but, my Word Whores blog post!" so I sent up an SOS and Jim answered. He also wrote a really lovely post to kick off this week's topic, about whether love and romance belong in SFF.

Kinda coincidental on my part, huh?

A lot of the time I prioritize my writing tasks and obligations (even if internally imposed) over everything else. David is a wonderful partner for me in that he gets that. He's always in my Acknowledgments as the person who makes everything possible because that's very true. So when he wants to do something special with me, that goes right to the top of the list. Love and romance are a big part of my life, as well as in what I write.

In a way it worked out really well for Jim to kick off this topic, because he's much more of a "guy's" author of fantasy than I am. I mean not just because he's a man and I'm a woman. When I stray from fantasy, I write contemporary romance, often erotic. When he strays, it's into pretty hard-core horror. I feel pretty safe saying that there are a lot of male readers who will not read my fantasy books because of the romance in them. This isn't spitting into the wind. A couple of days ago a guy, who identifies as Bearded Guy, posted to a Reddit fantasy thread a spiel directed at female authors of fantasy. I mean, he titled it, "Female Authors, Let's Talk."

He starts with this:

As everyone (probably) knows women are underrepresented in fantasy. I'm by no means an expert on the history of the industry but its easy to see that there is still a lack of female authors. Why this is, I can't rightly say. What I do know is yesterday I caught myself shamefully contributing to the problem.

Let me preface this with the little fun fact that I can't stand romance novels. They really don't jive with me on any level. So, with that in mind, yesterday I was looking at recommendation threads and lists. (Namely the post by Krista D. Ball about books that don't get recommended much).

While looking through all the authors and books I noticed myself spending less time reading (or skipping all together) the descriptions of books suggested that were written by female authors. The reason for this I think is because out of a handful I did read they all were either UF or romance. As I said earlier I don't like romance a bit. UF I'm not too keen on either.

So after noticing I was skipping female names in the list to read about the books written by men I felt shamed. In the industry though it does seem to me like women are getting more attention and being published more. But, there is an expectation that (at least on my part) they write UF, YA, or romance. Looking at the people I've seen on panels and heard about on here that assumption is sadly reinforced.

Perhaps I don't have enough exposure to a lot of the newer authors but I have yet to see many successful female authors in what could be called (and I also hate titles, fun fact) normal/mainstream fantasy.

From there the comments start with recommendation of female fantasy authors who keep that icky romance out of their books. Then, as the story got passed around, more people jumped in. Happily for me, other people - Janny Wurts, in particular - called him on his fundamental premise that he hates romance. As she points out - and as Jim did, too - men will tolerate from other men and from the male POV, what they won't tolerate from women. It's not so much the question of whether romance and love should figure into SFF, but whether men will accept it from the female perspective.

Which still seems to be no.

That's fine by me. I'm a firm believer that everyone should be able to read exactly what they want to. I want people to love reading my books, no slog through them. That said, I know A LOT of female SFF writers who work *really* hard to keep the girly stuff out of their books. Women writers on panels with me have said as much publicly. In private more than one has told me that I'll never be respected as a fantasy writer if I don't cut out the romance.

I hate hearing this.

It reminds me of being in college and grad school, where I studied neuroscience and most of my cohort were guys. More than once professors advised me to think and behave more like a man if I wanted to succeed. In those exact words.

I didn't believe it then and I don't believe it today. Females are half of the human race. We bring value from that perspective. We are the yin to the male yang. To bring balance, we don't convert yin to yang so we can have a big bucket of yang. When people say this kind of thing, the implicit assumption is that female is lesser and not worthy. When Bearded Guy asks for books by female authors that are writing "normal/mainstream fantasy," he's revealing the tacit belief that romance is not normal. That, to take it a step further, that the traditional male perspective is mainstream and female is not. To me he's saying, "I want to read and support female fantasy authors who write like male authors."

Maybe I'm oversensitive, but I don't think so. Kristan Higgins wrote an amazing article for Publisher's Weekly that went up nearly at the same time as Bearded Guy's. She talked about teaching at a writing conference at Mt. Holyoke College, where this happened:

The keynote speaker was Andre Dubus III. In his address, he described the typical romance reader as “some woman reading a schlocky romance novel while simultaneously watching soap operas and eating.”


During the q&a period, Judith [Arnold] (a friend of mine) asked Dubus about his knowledge of romance books. He admitted he’d never read one. Most people who criticize romance haven’t, she countered. Dubus said he was put off by “those cheesy covers with Fabio” and went on to apologize—and change the subject.

I really want to ask Bearded Guy what romances turned him off the genre. Mostly I don't want to hear romance in fantasy bashed anymore.

I'm really all for balance.