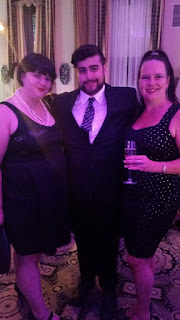 I'm writing this post on the plane back from New York City and the 2015 RWA National Convention. I'm on airplane wifi, somewhere over West Virginia, and the plane is quite certain that if I connect to our Word-Whores programming calendar, dire and terrible things will occur.

But I have plenty that's off-topic to say. The convention was wonderful.Here's at the Black & White Harlequin Ball at the Waldorf Astoria with my agent Connor Goldsmith and good friend, agent Jennifer Udden, of Donald Maass Literary Agency. There may have been a lot of free champagne involved, but there are thankfully no photos of that phase of the evening.

Despite the many parties, time spent catching up with friends and business meetings, I managed to attend a few workshops, and live-tweeted nuggets I gleaned. I thought I'd share those here.

Julia Quinn gave a terrific keynote speech. She spoke to the universal truth that you're more likely to see the President of the United States than your own book in your local grocery store - and how that relates to a writer's sense of self worth. It's tempting to think about the market, what your readers might demand down the line and how to hook them into the next story, but pointed out that our primary concern when writing a book in a series has to be THAT novel, not the overall series arc.We can't escape being liked - after all, there's a reason they call it popular fiction - if we couldn't be popular in high school, then by God we'll do it now. However, she very wisely pointed out that when we accept that we can't please everyone all the time, it frees us to write the book we need to write.

I learned a number of new ways of looking at conflict. Virginia Kantra gave great insights on it in a workshop on emotional content, saying that without suffering, there is no growth. Without conflict, your hero & heroine are merely dating. Michael Hauge lived up to his reputation, giving a great workshop on storytelling. He said that the hero or heroine of your story doesn't need to be heroic, but must have the potential to become heroic and that a storyteller's goal is evoking emotion in the reader - and emotion arises from conflict. Outer conflicts should occur more frequently and become more intense as the story progresses, to accelerate pace. Inner conflicts arise from emotional wounds and the beliefs the hero or heroine holds that grow out of emotional wounds are never true, but are always logical. Inner conflict is the conflict between being safe & unfulfilled vs. fulfilled & scared shitless.

That's the shorthand version. I recommend Hauge's workshops, which can be obtained online here. I know I'm going home with some increased clarity about what I want to write and how.