Working Up My TED Talk 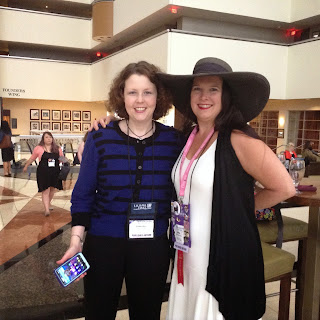 I always say that one of the best perks of being an author is befriending other authors I love to read. Here's me and the amazing Jennifer Estep at the RT Convention. I have mad love for her assassin heroine Gin and her Elemental Assassin series. And not only because she's up to 14 books in that series. The woman is a powerhouse. Dayum. We got to sit and have a long conversation, which is just my favorite things about conventions - picking each others' brains, hearing other perspectives on both our art and the business.

It's like having a week's worth of intimate TED talks.

I'm fascinated by TED talks and listen to/watch them over the internet from time to time. Which is saying a lot because I really don't like to spend the chunks of time that can require. My days are pretty packed and stuff like that feels like a diversion from the work I need to accomplish. But I also love the concept - "Ideas Worth Spreading" - and some of the talks have really opened my mind. Some favorites are Amanda Palmer's The Art of Asking, Stella Young's incisive breakdown of "Inspiration Porn," Eli Pariser's eye-opening discussion of online "filter bubbles," and Elizabeth Gilbert's wonderful discussion of creative genius.

(Apologies if I just sent you down a rabbit hole of TED talk watching...)

At any rate, I contemplate sometimes what I would say, given the opportunity to give my own TED talk, which is why I suggested this topic for the Bordello. I figured it would make me think about it in a more focused way and I want to hear what the other Word Whores would say.

But when I sat down to write this post, I still didn't have a clear idea. I have about ten-thousand pieces, but not a single, concise thought. Which left me feeling daunted until I realized that's partly what the TED process is about. A colleague of mine - from the day job - did a local one on drinking water. She told me that she worked and reworked her talk with extensive coaching from the TED people. They kept telling her that they didn't really feel her passion for clean drinking water and that it was a revelatory process for her to dig into what that really meant to her.

The point then, I suppose, is that I wouldn't need a perfectly clear concept to begin with. That's how essay-writing always worked for me. I started with a nugget of an idea, a pivotal moment, and explored it. That's how I cemented my process of writing for discovery, no doubt.

I think I'd want to talk about balance, the concept of the middle path. In my bio, I used to say that I'm a fence-sitter - something I later took out because people interpreted that as me being indecisive, neither here nor there, which isn't very accurate. No, by that I mean that I'm a right-down-the-middle person. On most tests, I come out balanced. I'm equally right- and left-brained. My writing voice is equally male and female. I'm neither Type A nor Type B, but an equal measure of both. Though I come out as an INTJ on the Meyers-Briggs test, I'm mildly so on all four parts and could easily tip into the opposite designation.

Which is why it should be no surprise that I'm both a scientist and a writer of romance and fantasy. Once I told my agent a true story that involved me using a pendulum to dowse and how I inadvertently caught the attention of something vengeful and not-quite human. He exclaimed, "My God, Jeffe - you're a scientist!"

And as such, I'm a believer in empirical evidence. This is why I double-majored in college, in biology and comparative religious studies (another two-sided aspect) - because I see both sides of the world. That which is material and that which is immaterial.

That is what I'd talk about.

Wouldn't it be fun if I got to, someday?