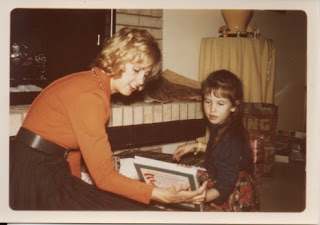 In honor of Mother's Day, I think this photo says it all. Also, I kind of love that the book my mom is showing me is Dr. Suess and how rapt my expression is. There's a reason the dedication in THE TALON OF THE HAWK says what it does. 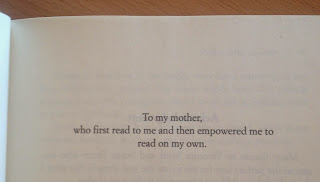 I have to write an acceptance speech for the awards ceremony at the RT Convention this week, for the Seal of Excellence for THE MARK OF THE TALA. In a minute or less I have to thank everyone who brought me to this point. A daunting prospect. My primary goal is to get through it without weeping. You know I'll be mentioning my mom. 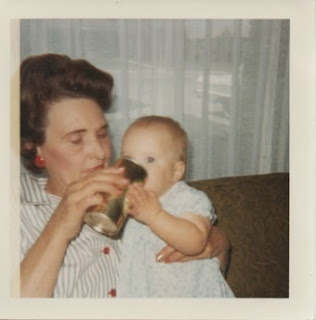 Speaking of the RT Convention, I'll give a little shout out to the other woman who raised me, my grandmother, who I still miss. This photo also says it all about my formative influences.

Yes, my grandmother is giving me beer. She even wrote on the back that "she sure likes her ale - isn't this cute?" No, you can't prosecute her, as she's long since passed away. It was a different era and there's truth to the adage that ale is like mother's milk to the Irish!

Now you know why I'm always in the bar. Though you'll see me with Jameson or martinis, not ale these days. I get my vanity from my mother and grandmother, too.

This week's ACTUAL topic in the Bordello, following on last week's digital networking theme, is "social media gaffes – worst things anyone has done to you."

It's an interestingly phrased question - not how we ourselves have screwed up, but what someone else has done to annoy us. I'm pretty lucky in that not much of this has happened to me. I also block people pretty quickly if they step over my lines. One guy was trying to get me to post more pics of my over-the-knee socks. I said that wasn't my schtick. He persisted. I blocked.

Several of the Word Whores were generous in their mentions of me in their posts, and how I've helped them network. I'm really happy to help people network and I don't mind the "coattailing," as Marcella calls it. But there are limits to that. First, let me say that none of the Word Whores have ever done this to me. There was this one gal, however...

We were on Twitter, as I am a lot of the time, and a book blogger was tweeting to me about loving my book. She and I were going back and forth, talking about my hero and what she loved about him. And another writer jumped in and started talking about HER hero and her upcoming book. She totally redirected the conversation.

It annoyed the hell out of me. Thought I did ask a couple of my friends to look, to do a crazy check to confirm that I wasn't overreacting. They agreed that it was rude.

The thing is, I know a lot of people hesitate to convo intrude on Twitter and I always tell them to go ahead. That's what Twitter is for. If people get annoyed that you jumped in on a conversation, screw them because then they shouldn't have been having the convo on open Twitter in the first place. The caution here, however, is don't be so socially tone deaf, so madly focused on self-promotion, that you jump on stage and wrench the spotlight from shining on someone else to focus it on yourself.

It's rude in real life. It's rude on social media.

What about you all - got any social media horror stories?

You all have a great week and hope to see you at RT!!