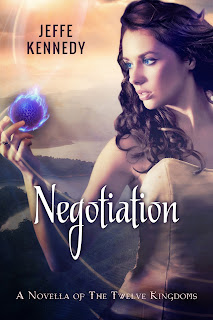 Last week, to celebrate the release of THE TALON OF THE HAWK, I also released a prequel story to the series, NEGOTIATION, and set it to free. You can still download it free for a couple more days!

Our topic in the Bordello this week is Three Reader or Writer Cons/Events Near You (that you'd recommend). Love that Calendar Queen KAK tacked on "that we recommend." I've bitched about cons I hated before, so it's good to focus on the love.

2015 will be Bubonicon's 47th year! Held annually in Albuquerque, New Mexico, usually at the end of August, Bubonicon is a Science Fiction and Fantasy reader convention. It's organized in part by some of the fine folks at Page 1 Books, who hosted the Standing Room Only signing I did with Darynda Jones yesterday. (Or, as I like to see it, that she did with ME.) Bubonicon attracts many of regionally local SFF authors - a surprising density given the relatively sparse populations of our big square states - like George R.R. Martin, Connie Willis, Stephen R. Donaldson and Melinda Snodgrass, to name only a few. This year also sees long-distance guests Tamora Pierce, Mary Robinette Kowal and Catherynne M. Valente. At $40, the registration fee is dirt cheap and the organizers generously do not charge their featured authors to attend. Highly recommend. August 28-30, 2015. Albuquerque, New Mexico.

I confess I have not attended Reading Until Dawn before - because this is the first year! However, I've met organizer Casey twice now, at the Coastal Magic Convention (which I also love, but it's not near me) and when she and two of her buddies road-tripped down from Denver yesterday to attend our signing. Her whole concept is to create a low-key atmosphere where readers and authors can hang out, mingle and have real conversations about books. At $85 for the weekend, this is also very affordable to attend. I'm looking forward to it! October 8-11, 2015. Denver, Colorado.

Okay, I haven't been to the Sirens conference before. I only heard about it last fall at the World Fantasy Convention (also great, a movable feast that so far has not moved near me). (Also WFC - foolishly, to my mind - uses a different URL every year, so that's the 2014 link.) Amy Boggs, SFF agent at Donald Maass Literary Agency told me about it. I was all fired up to go to this all-female Fantasy convention, also held in Denver - until I found out it's the dead-same weekend as the aforementioned Reading Until Dawn con. ALAS! Still, I'm a woman of my word and, though sorely tempted to renege, I'm going to RUDC instead. (Though I'm totally sneaking out at some point so I can meet Kate Elliott and Thea Harrison for drinks!) This one is pricier - $195 now and $230 at the door. Still the attendees and programming look amazing. October 8-11, 2015. Denver, Colorado.

Every-other year my local chapter, LERA, hosts a very small, one-day conference, Enchanting the Page. This is always a stellar day of workshops, discussions and pitches. This year we have Alexandra Sokoloff giving her awesome workshop on Story Structure, along with editor Brenda Chin and agent Laura Bradford. At $85 for members, $95 for non-members, plus an optional $25 for the pizza and movie night - where Alexandra will walk us through the screenwriting tricks used in a major blockbuster film - it's a great value for the aspiring writer. November 7, 2015. Albuquerque, New Mexico.