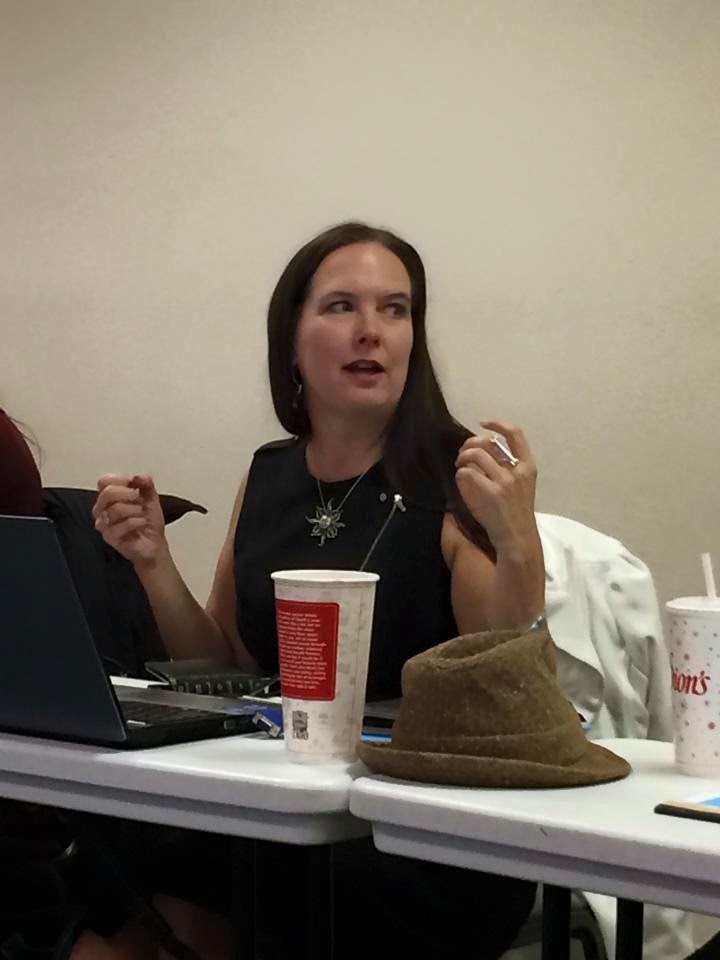 Yesterday, at #LERANM, my local RWA chapter, I gave a tutorial on using Twitter. We had a great time and the lovely and viviacious Katie Lane snapped this pic as I was talking. And gesticulating. LOL!

This week's topic in the bordello concerns perspective - as in first, second or third person point of view (POV) - which works best for us and why.

I started out writing in first person, because my natural form from the beginning was personal essays. Very much like my blog posts. I sometimes segue into second person, I notice. Particularly in blog posts where I start saying things like you don't really notice how essays and blog posts tend to be in first person because you expect non-fiction to be more so than fiction. <-See what I did there?

So, when I went to write my first novel - which eventually and after many revisions and iterations became Rogue's Pawn - I wrote that in first person. In fact, and I admit this with chagrin, I originally wrote that book in a memoir style. As if I, myself, had fallen through a gate to Faerie and wrote a memoir about my adventures. I thought I was SO BRILLIANT doing that, subverting the genre tropes and all. Thing is, I didn't write genre well enough to subvert the tropes - something I had to learn through painful trial, error and ego-bruising. Thinking about it now, it IS kind of a cool idea. Something I might have the craft to pull off at this point.

Anyhoo. I wrote in first person because it was what I knew and I had some skill at it. Readers tell me they like my first person perspectives when they don't like others. It's not easy to do because it's so restrictive. The reader can only know what the first person POV characters now. You can mix in more than one first person POV character (I don't like it) or mix in a third-person POV in with the first (like that even less), but the purest form - and really my very favorite - is one person, telling the story through their eyes. It works well for me because I feel like I can really delve into the person's character, along with their emotional and spiritual arc.

This may have marked a step up in writing craft for me however. I might try it again, if I can make sure to wash off the boy cooties afterward. ;-)

For the fantasy series I'm working on now - brand new, top sekrit stuff! - I'm writing in third person alternating POV, because my agent, fabulous Connor, asked me to. He  and Iwanted to target a particular market and I like the idea of selling books as well as the next Word Whore. At first I struggled, however. I *really* wanted to write in first person, particularly the heroine. But I applied discipline (GASP) and found my way through to her voice. Now I'm into it.

So, that doesn't really answer the question, I know. I like having all the tools. Each story is different and so are the various markets.

It would be interesting to know if you all like how I write one kind of POV over another - feel free to share!