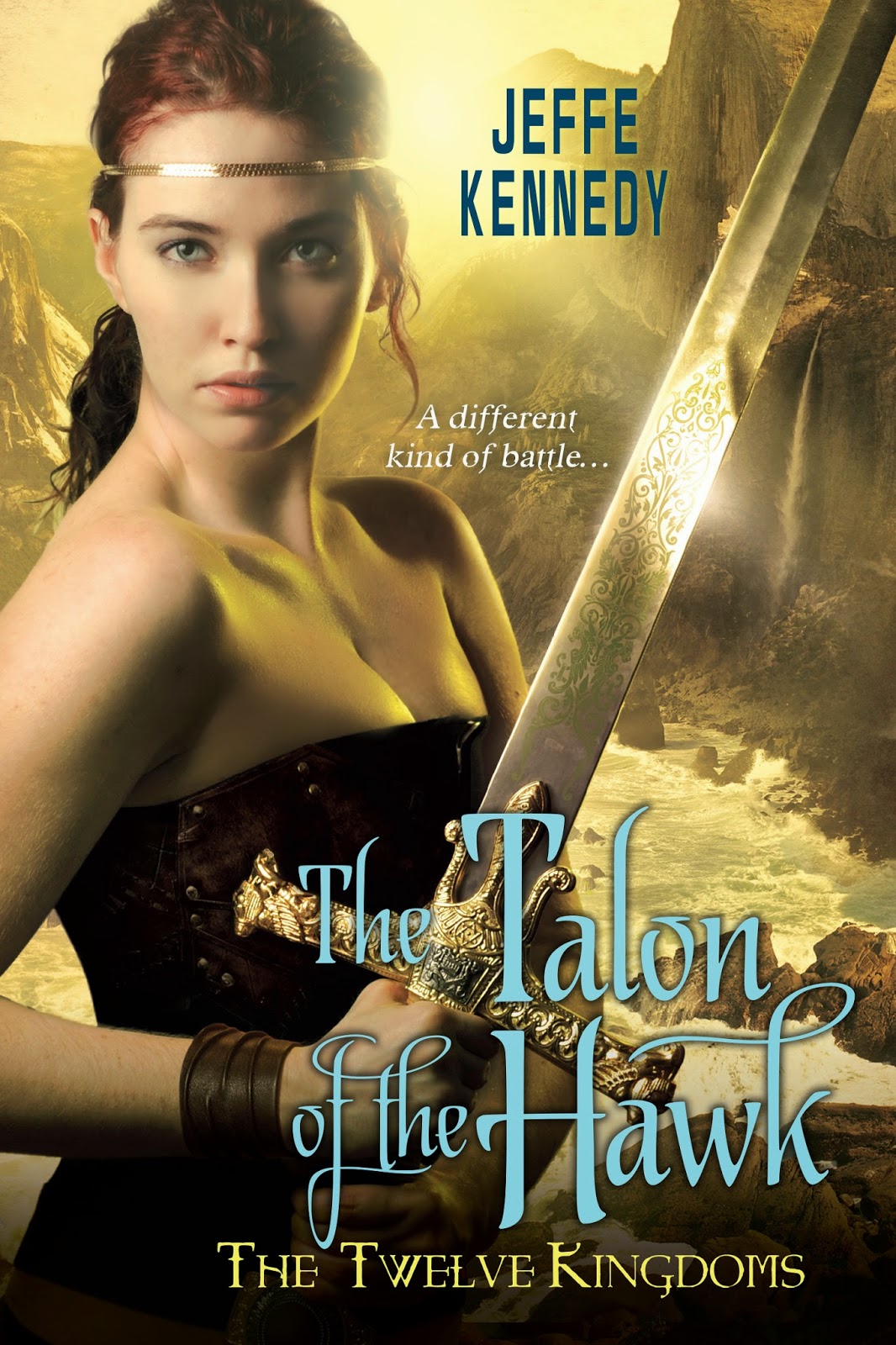 Our topic this week is Managing The Trolls: How you handle it when people/readers are talking about you...and not in a nice way?

Well, Ursula, warrior and Heir to the High Throne of the Twelve Kingdoms, featured on my fabulous new cover above, has her way of handling things.

The rest of us have to come up with something not involving the sharp edge of the blade. Alas.

This topic is timely because just yesterday I was talking with a friend who asked me for advice on ridding herself of lingering nasty feelings. A family member struggling with childhood issues had dumped a huge load of poison on her. Part of that was resentment that my friend has moved on, put the past behind her, and the family member has not. Two days later, she still felt the toxicity of that emotional upheaval.

So, though we're ostensibly talking about how to handle it when people talk about you in a mean way, I'm looping in dealing with people who want you to wade into their emotional cess pools, because it's the same advice for both.

It's not easy, but it's the best advice I have.

Don't go there in the first place.

Seriously, cut it off before you ever get close.

Now, this is difficult for a number of reasons. Top of the list is curiosity. Humans are curious people. We WANT to know what's going on. Click bait and all kinds of marketing is based on this simple truism that once our curiosity is piqued, we really want to know what it is. What IS #7 that you couldn't believe? Who ARE the Top 10 Best Beach Bodies - and can we see their pictures? Milas Kunis is pregnant with Ashton Kutcher's baby??

Another reason is that we're particularly curious about terrible events. We see this all the time. People cause wrecks on the highway because they slow down to rubberneck OTHER wrecks and don't pay attention. We're particularly drawn to the tragic, the horrible. Murders, rapes, abuse. Someone held captive in a basement for fifteen years? We can't look away.

This is why trolls have power. They play on both curiosity and the tragic. So we're doubly drawn in. And, like the trolls of mythology, they feast on our attention like so much rotten flesh.

People who want to dump their emotional toxicity, like my friend's family member, are doing much the same thing - they feed on this attention. And they depend on yet another reason it's difficult for us to cut them off - people are also kind.

Yes. People are kind. They WANT to help.

I know, everywhere you look someone is saying how awful and cruel people are and how the entire world is going to hell in handbasket, but most people - the vast majority - really do want to be helpful. Particularly if we're asked. So turning a cold shoulder on someone who's asked for help, particularly someone we care about, is enormously difficult.

So in trying not to go there in the first place, we're fighting two things: our drives for curiosity and kindness.

I learned a lesson about this in my mid-twenties when I met and fell in love with a man who had two children. The divorce was fairly fresh and had been hard on everyone. I'd never planned on having stepchildren, but I wanted David and they came with him. (Twenty-four years later, that's still the case.) We really struggled with creating a calm and peaceful life, for ourselves and for the times the kids lived with us. Differences over the divorce and financial resolutions took years to resolve - and frequently involved tremendously toxic fights between the exes. These battles would wreck David for days and my own peace of mind would be collateral damage. We finally decided we couldn't continue this, so David cut off contact with the ex, except as mediated by professionals or the courts.

It made a HUGE difference. I think it's not going to far to say it turned our lives around.

The decision took a great deal of resolution on David's part. After all, one is supposed to amicably work with one's ex where children are involved. People judged him for it. More, his ex hated that they no longer had that connection, unpleasant though it was. One day, when the kids came to stay for the weekend, they brought a letter from their mother to David, for him to read.

If this scene were in a novel, that envelope would have been steaming with green nasty smoke.

David threw the letter away and it sat there in the kitchen garbage, muttering to itself, unopened and unread.

My stepdaughter stared at it with her huge blue eyes and asked, "aren't you going to read it?"

David said no, he wasn't. She asked didn't he want to know what it said? and he said no. She got all teary and told him her mom wanted him to read it.

All these years later, I remember that moment vividly, both the impulses to make her happy and satisfy my curiosity. I imagine it was ten times worse for David. But he persevered and that was the turning point. Things changed after that, gradually becoming better and better.

So, this is all a way of saying that the best, cleanest and most effective way to deal with the mean things people say about you - and they will! no one escapes that - is not to look in the first place. Resist the curiosity, the temptation to rubberneck. Know that your innate kindness will prompt you to offer help.

Then go do something positive for somebody else. Something of your own choosing.