Dropping the Soap and Other Bits of Stage Business 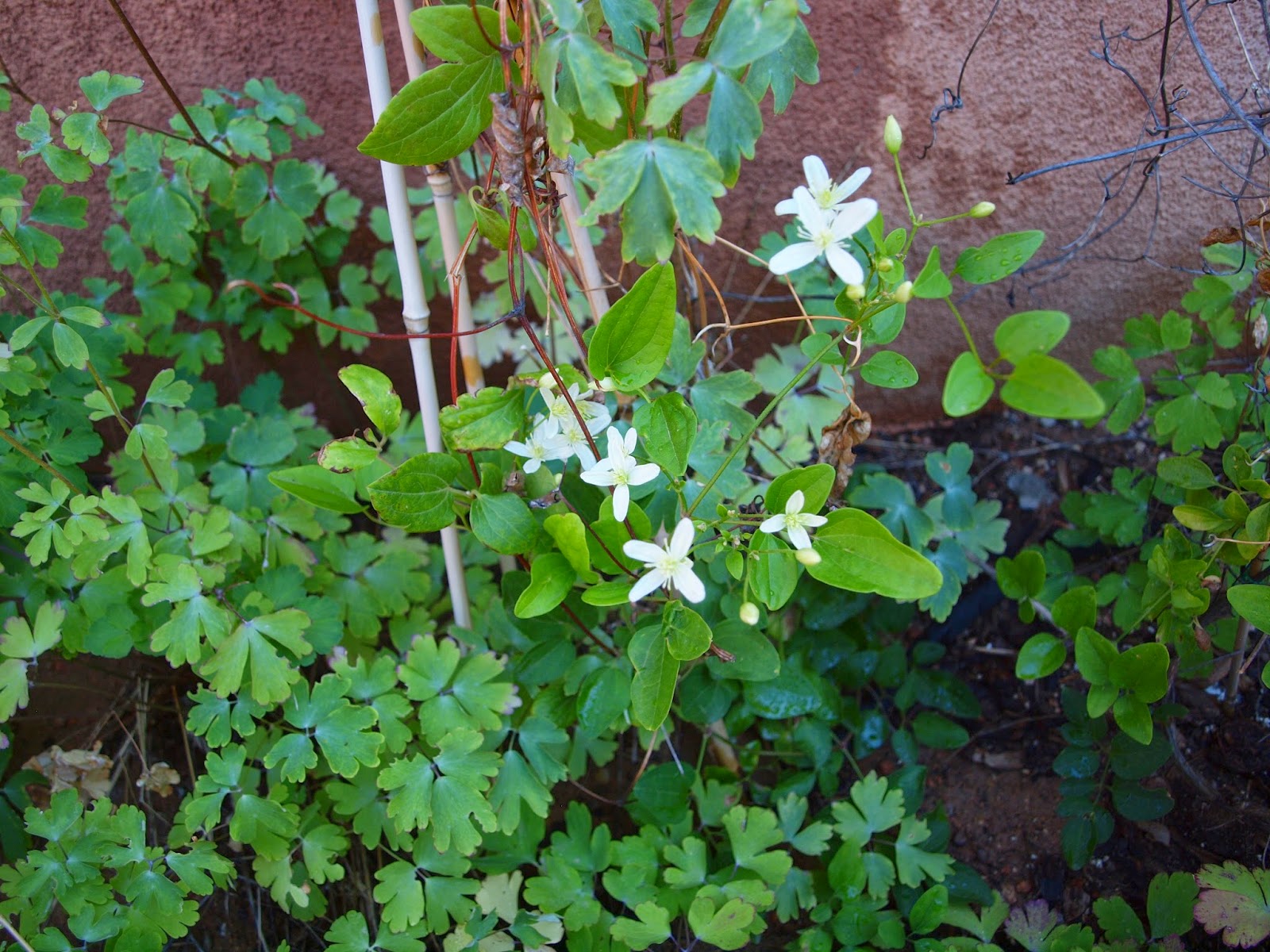 My clematis paniculata is blooming! This is noteworthy because my family long referred to this as "the birthday vine." When we moved into our new-to-us house in Denver just before my sixth birthday, this vine was growing in the back yard. We didn't know what it was and for some reason, no one ever bothered to find out. Most significantly, it bloomed right around, if not on, my birthday - an unusual even for late August. Thus, the Birthday Vine. My mother finally sold that house last summer, which was the end of an era for us. To create a bit of continuity, I found out what the rest of the world calls it and planted one in my back yard. It's struggled along, gaining strength the last couple of years - clematis are slow to establish - and yesterday, the day after my birthday, I happened to notice it had bloomed!

A good omen, to be sure.

Last week in the Bordello, we discussed dialogue during action scenes. I think I was in the minority in being all yes, yes, yes to trash talking while fighting. Never mind James and his snarky comments about mayonnaise not going with PB&J. Of course, not all of us are limited to grunting like Neanderthals.

This week's topic is dialogue in non-action scenes. And yes, I did look ahead to next week to see if we're doing dialogue during sex scenes.

James' defined an action scene as "fisticuffs, swordfights and knock down, drag out brawls." Which makes non-action scenes... everything not that? Which leaves a lot.

Going to the most literal level, action is "the fact or process of doing something, typically to achieve an aim."

I realize I'm dwelling here, but I want to point out that, really, there should never be a non-action scene in any book, viewed that way. If the characters aren't trying to achieve an aim, there's no story. (With the possible exception of something suitable for The New Yorker, but that's another discussion entirely.) One of the best bits of writing advice I ever received - even better because it was flip - was that your characters should never be doing nothing, that even sitting in the bathtub, someone is going to drop the soap eventually.

So, it's important to remember that even during dialogue-intensive scenes, the characters should always be doing something. Even if they're sitting on the patio, discussing the upcoming release of Rogue's Paradise (random plug), they should be drinking cocktails or fidgeting with the empty wine glass. These small gestures given movement and reveal subtext and internal monologue. Dialogue is what's articulated - and it's only the tip of the iceberg.

In acting, we referred to this as "stage business." Just as characters can't be sitting in the bath tub, actors can't stand around on stage and exchange words. Even on radio shows, they add sounds to indicate background action. It was an interesting transition when cigarette-smoking went out of fashion and then was actively banned in public spaces. There's a reason so many actors smoke - check out the movies from the 30s and 40s, every person is a chimney. It's because actors would smoke during conversations to give them stage business. And, naturally, carried the habit into their personal lives. Smoking became a stage-business crutch for many years. Far better to give a long meaningful glance while drawing on a cigarette, than to stand there empty handed.

But crutches are exactly that. Another word for the concept is our old friend: cliché. It's a constant battle to find ways to describe body language during dialogue. One of my editors has a limited tolerance for people shrugging or folding their arms. She's made me very aware of that, so I've come to use those gestures in precisely limited dosages. Which means I need to find other things.

One trick I've discovered is to find a character's personal tic. Whatever thing they tend to do habitually. If you can tie it into either what's haunting them or what they desire, even better. Remember in Star Trek: The Next Generation, when Picard, after being captured by the Borg Collective, developed the tic of touching the place where the Borg implant had been? Brilliant bit of stage business by Patrick Stewart - who, not incidentally, trained as a Shakespearean stage actor.

So, when crafting scenes with intensive dialogue, look for those bits of stage business. People are always thinking while they're talking and listening, so let their actions give them away.

No such thing as a non-action scene.