Love the panorama function on my phone camera.


To find a way into something to say about this week's word, disease (I promise the "e's" get much happier), I played the XKCD game of throwing the word into Google for the top results. 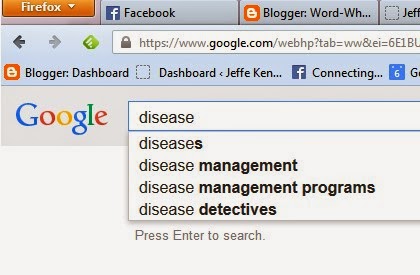 There's something about that sort of investigative work that is relentlessly fascinating. Look at shows like House. Sure, Hugh Laurie played a fascinating character, but a huge part of what drew me back to episode after episode was the puzzle. The fact that this particular problem-solving exercise carries life or death drama makes it that much better.

Our bodies are mysteries in many ways. We don't understand what goes on inside them much of the time. In this way, they are black boxes - we can look at what goes in and study what results, but what goes on in between can be a mystery. Short of cutting the body open and taking a look - via surgery or withdrawing samples - the analysis become a logic problem.

In an interesting terminology distinction, the word "symptom" is used only for human beings, because they are capable of describing how they feel. Animals don't have symptoms. They have "signs." To play disease detective with an animal, you can't ask how they feel - you can only observe.

This has always struck me as funny because are we really that much better at self-analyzing? That little pain could be a random muscle twitch, a twinging nerve, an impinging tumor or a major infarction. Being who we are - with access to the internet - most of us race right to the Worst Thing Possible.

So, we rely on the specialists. The appliers of logic, the problem-solvers, to eliminate the improbable, focus on the possible and hope that it's solvable.

Now I want to write about a Disease Detective.