Let's look at this week's topic seriously for a brief moment. The idea of social media is a good one in as much as it serves several very important purposes. It is also a horribly, desperately dangerously bad idea in as much as it can suck away roughly eighteen hours of your day without you ever realizing when the heck just happened.

I'm on Facebook every day.I'm on this site nearly every day. I spend a bit of time on Twitter and in the words of Kevin Bacon, I "googlebate."

(Googlebating, for the record, is the fine art of using the Google search engines to see what is being said about you and your career. Mostly mine tells me I have a book coming out and occasionally points me to a nice review I didn't know existed. More on that later.)

At least half of the time I spend on these tasks is directly related to work. Honest. The rest of the time is goofing off when I should be writing, because all work and no play makes Jim a homicidal maniac. And as I have stated before and a few of the Word Whores can attest to, I'm not exactly tiny.

I used the sites to post about the reviews I find, to announce those books I have coming out, to post about other books and movies I think are worthwhile and to occasionally post about why you should be writing instead of reading posts about how to waste your time online.

Just recently, thanks to Angry Robot, I've done a few guest blogs and interviews that are going up all over the place in order to further push your attention toward my next upcoming novel, Seven Forges (See what I did there? Clever, subtle product placement. Maybe not as subtle as that can of Coke in a fourteen dollar made for TV movie, but you do what you can.. Later, just for kicks, I'll put up the cover of the book again. Mostly because, darn it, it's a really cool cover.).  I'm also currently halfway through the third of four short stories that will be placed at different sites around the interwebs for the sole purpose of, once again, promoting the heck out of my novel. A certain Ms. Pang has been graciously working as my first reader and editor on these. Looks like I'll be returning the favor for her sometime should she need it.

I could spend the entire day goofing on the internet. I've been guilty of coming close a few times, but only a few.

Can I add much to what Jeffe has already said? Not really. Again, that one is sharp.

Be smart about it. Unless you have absolutely no responsibilities (and you KNOW you have responsibilities) you need to invest your time carefully. Do not fall into the traps set up for your perusal. Traps? Yes, traps. There are video games and poker and a million other little devices out there just waiting to sap your time and your will to live. Once upon a time I saw someone kill off about three months building an amazing farm on Farmville. It might have been a lot more time but I'm being kind. One day that someone woke up and realized that a rather huge amount of time had been invested in something that was no longer even very much fun, but had instead become a political stew of backstabbing and manipulation. Yes, I'm serious. Yes, Farmville. It's astonishingly easy to do. Like Jeffe said, DON'T GO DOWN THE RABBIT HOLES. Time limits are a brilliant idea. For me, the first rule is I finish my word counts and then and only then do I allow myself to seriously consider bouncing around online for a while. Mind you, emails are a separate beast for me. Those take their own special allotment of time.

The thing to remember is that the social media aspects should be fun, yes, but if you're serious about running a business make sure you remember that you are RUNNING A BUSINESS. It's like when I occasionally give away short stories. Yes, it happens, but it's the exception not the rule. I always enjoy the writing part of my business. I also always remember afterward that this is how I make a living. If I give a story away it's because it's going to a worthy cause. If I want to give a story away online (you know, like the ones I mentioned above) it's to further my business in one way or another, and because I set aside the time to write those stories. It's about promotion. Note that I and my publisher are deciding the best places for the stories to go.

That's really all I can suggest on this subject. Why? Because this is all the time I've allotted for writing this particular article. Back to work. And maybe a little time on Facebook. Just for fun this time. 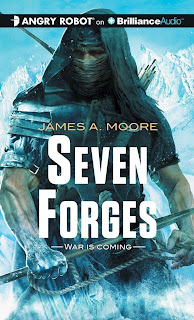 This one, by the way, is for the audio book edition. Did I mention I have an audio book deal for this one? I do. How cool is that?