Playlists - Does Anyone *Really* Care? 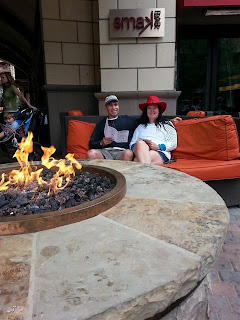 We’re on our way back from Telluride today, driving through the rain on an unseasonably cool and misty morning. Yesterday we ate lunch by a firepit in the ski village and drank Irish coffee. Delightful, but possibly my coldest birthday celebration ever.

Feels like it could be an early fall. Makes me want to go out and pinch caterpillars to assess their furriness quotient.

This week’s topic is all about playlists. Do we make writing ones, do we make specific playlists for certain books, do our readers care.

I really wonder about that last one.

But, I’ll address the questions in order.

I do make writing playlists, but not nearly as often as I used to, and now usually only for specific reasons.

When I first started writing novels, trying to build a consistent ritual of working and producing a reliable body of work each day, I used music as a tool. It was much more difficult for me then to get in the correct frame of mind to sink into the story and gather up the threads. I learned to rely on ritual to get me there – certain clothes, certain timing, a pattern of entry into that world. From very early on, I found that the soundtrack to The Mission would get me there. The opening strains of On Earth as It Is in Heaven, soft strings vibrating into life, would transport me and the words would flow.

For a long time I just played that, over and over. Then I added to it – the soundtrack from Master and Commander and then Billy Joel’s classical piano album, Fantasies and Delusions. To this day, the playlist sits in my iTunes, labeled “Writing Music.” A relic, in many ways.

Because I don’t really need it anymore.

Like a professional athlete, I’ve spent enough time and effort training now that I don’t need to trick myself into producing word count. In fact, nearly all of the time, I prefer total silence now. Not only do I not need the music, it’s a distraction.

The only exception is when I’m deliberately trying to create – or retrieve – a mood that I’m having trouble getting at. I did this last year, when I was writing Ruby, my New Orleans steamy romance that came out in May. I really wanted to capture that ineffable New Orleans vibe, so much of which comes from the music. The story mainly takes place in the French Quarter, in restaurants and clubs. There’s even dancing. So I made a Ruby playlist, composed of many of my old favorites. That meant buying a lot of the songs, as much of my collection had been on cassette tapes.

I also needed one song in particular that wasn’t Cajun or New Orleans. You’ll see why.

I only listened to it some. Once I got the groove, I went back to writing in the quiet, with the music playing in my head for just the characters to hear.

So here’s that playlist.

I’ll give a book away to a randomly selected winner – either one of mine or one from the pile ‘o books still left from summer conference season!