How to Sell a Series When You're Not a Pre-Plotter 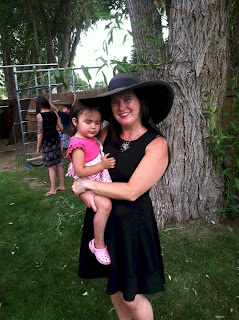 This is me with my granddaughter, Aerro, up in northern Wyoming last week. We all gathered to say goodbye to my Father-in-Law. It was bittersweet. Such a sad event, but also the largest gathering of the family possibly ever before or again. Daughter Lauren and Grandson Tobiah are playing on the jungle-gym in the background.

So, last week the Bordello was in rare near-consensus on the topic of outlining and how much we hates it, Precious. But what happens when you sell a series?

I mean, it's what we all want. Kind of the holy grail for writers, if we don't get to pick something like "have J.K. Rowling's career." For a long time (much longer than I liked), whenever my family asked me what I wanted for Christmas or my birthday, I'd reply "a lucrative, multi-book contract."

(Fortunately they love me and find me amusing, for the most part.)

The multi-book contract guarantees that the book you write will have a home - no worries about where or who you'll sell it to. It also provides a sense of creative continuity. If you sell three books in a series, then you know you'll have that time and space to tell the story at least over those books.

And there's the rub.

I might have gleefully misted my way through the first book, but those editorial types are all persnickety. They want to know what the OTHER books will be about, too. Thus this week's follow-on topic: Selling a Series: Concepts, Synopses, Outlines, and/or Manuscripts.

Now, some writers have all the books in the series already written. This can be fabulous for when that lucrative, multi-book contract lands in their laps. The rest of the series is already written and it's dead easy to tell the acquiring editor what happens next. There are two drawbacks to doing this, however. One is that the editorial direction on book 1 might change what happens in subsequent books, creating greater or lesser revisions. Not that this is a huge deal, but it's not a slam-dunk either. The second drawback, which is the major obstacle to me, is that you might never sell that series. I have one book still that hasn't sold and it may never do so. It's one thing to have invested in a single novel that never sells and another to have done so with two or three.

But that's my particular schtick - I hate "wasting time." Many authors would likely argue that writing a book is never wasted, whether it's pubbed or not. I tend to be goal-oriented.

So, let's say you sell that first book and score big - get that contract for two more - and those still need to be written. What happens next depends on the editor.

For me, I sold the first book in my Twelve Kingdoms trilogy, which was already written, and provided with it a "series sketch" of the next two books.

Wait, you say. What are you saying, Jeffe? Did you actually KNOW AHEAD OF TIME what the story would be before you wrote it??

~scuffs toe in the dirt~

KAK used the analogy last week of an outline being like an itinerary for a vacation. That's actually how I see it, too. However, KAK and I should likely never take a road trip together. Even though we'd have great conversations.

You all know that vacation type - the route is ruthlessly planned and timed, down to which eatery will serve for each meal. Me? I know pretty much where I'm going, but I hate being tied to a schedule. I'd rather enjoy the serendipity of discovery. Yes, that means sometimes we eat later than we like, sometimes at crappy places. It also means we end up in places we would never have known to plan on.

Thus, the series sketch has been my savior. With Twelve Kingdoms, I have three daughters of the High King and I know overall how their stories fit together. Did I know this when I wrote book 1? No no no. But, in writing the story of the middle daughter, the personalities and destinies - for want of a better word - of her sisters became more clear to me. Clear enough that I could write a paragraph that went essentially "now that we've ended up in New Orleans with a car load of antiques, we need to drive up to Delaware to sell them. But that won't give us the profit we're looking for, so we'll end up driving into Newfoundland."

Now, some editors, after buying a series on this kind of concept, then ask for outlines and synopses of those books. So far, my Kensington editor, Peter Senftelben, has not asked for that, for which I'm tremendously grateful. I think it's a vote of confidence that he knows I'll turn in a coherent novel. Even my other editor, Deb Nemeth at Carina, who bought Ruby on spec and a "synopsis" that was really more of a sketch - :D- and then asked me for a "more detailed synopsis," didn't come after me when I, um, didn't send it until I'd finished writing the story.

It's not that I don't *want* to cooperate and provide that detailed synopsis. It's just that I can't write one. It would be a lie. I know many writers do this - turn in an outline or detailed synopsis and then cheerfully deviate from it (as Linda suggested last week) - and I suppose I could, if pressed. I'd rather work with editors who understand my process and trust me to make it work.

And, fortunately, they love me and find me amusing. For the most part.