What's New in the Land of Readers 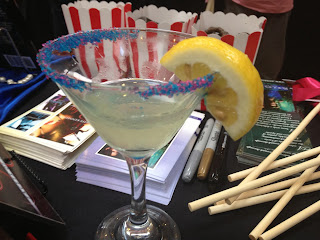 I was at the Lori Foster Reader and Author Get Together this weekend. During my signing, Angela James, Editorial Director of Carina Press, visited my table and I so coveted her lemon drop martini that she gave it to me.

If anyone asks how Carina treats their authors? THIS.

Because this event is more of a reader party and less of an industry conference, I didn't get tons of "official" information that pertains to this week's theme of "Industry Pulse-Trends, Tech, & Troglodytes."

However, I did talk to a lot of readers and that gave me an unusual - and fascinating - insight into their pulses.

Being primarily romance readers, they know what they like and how they like it. They were at this event to discover new authors to read and they were like kids shopping at a candy store. They snapped up bookmarks and cards. They tapped the cover images and said "tell me about this one." Things I heard from them:

"You had me at Contemporary."

"I'm a paranormal girl. I want THIS."

"What flavor of fantasy are you - fairies, shifters, vampires?"

What's interesting to me about this is, if you listen to the jaded and world-weary panels of agents and editors, they will shake their heads and say "paranormal romance is dead." I've been hearing that news make the rounds lately. Agents can't sell it. Editors can't buy it. Nobody wants it and all us writers might as well pack up our supernatural critters and store them in the basement until the next season.

Apparently the readers did not get this memo.

Now, they ARE tired of the same old, same old. I've seen a lot of eye-rolling over Yet Another vampire/werewolf love triangle. But this is a weariness based on lack of invention in the stories, not in the overall genre. Readers are hungrier than ever. Feed them.

Interestingly, there are many still struggling with the tech. I know the statistics say that everyone who's gonna get an eReader already has one, but that's not what I saw at this event. Many readers were stacking their raffle bets on the baskets with eReaders, so they could acquire their first one. One gal I talked to who hoped to win an eReader was all excited when I showed her the Kindle app she could put on her iPhone. She acted like it was a miracle.

As for the troglodytes, the paper-only readers are still out there. One gal said she simply CAN'T read on any eReader because of something headaches something eyes something technical jargon. I didn't quite get it, but she was annoyed I didn't have paper books for her. Alas.