The Moment I Decided to Be a Career Writer 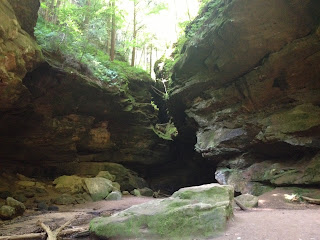 This is a grotto we visited in Hocking Hills, Ohio. Truly a magical place.

I'm a bit embarrassed to tell you all about the moment I decided to be a career writer. When I made that choice, I would never have forseen that it would be more than twenty years before I reached the point where I could be looking at living on what I make from writing.

Though I did know it was a long-shot decision.

So, here's the story. Those of you who've heard it before may be excused.

Back in 1991, I was a graduate student getting my PhD in neurophysiology. Though I loved the subject matter - auditory processing in bats - things with my program were not going well. I'd graduated college in 1988 and entered the PhD program that same fall. Looking back, I can see lots of what was wrong. I felt a lot of (self-imposed) pressure to do something brilliant. I'd chosen a master's bypass because it felt like a waste of time to do the two-step approach. I hadn't really examined what I wanted out of life. And I had this horrible bipolar advisor who pretty much disliked me from the beginning.

Several things happened in 1991. In January of that year, I started dating David. At that point, I'd decided to leave the program at the end of the spring semester, because I was so miserable. He was a fling, someone I likely wouldn't have dated, if I hadn't thought it would be short-term.

I fell in love and we're still together.

Because I was so much happier, I felt renewed commitment to my degree and, not incidentally, to staying with this guy. By that winter, however, it became clear to me that things were not right.

There I was, at the Neuroscience Convention in New Orleans. Back then, this was a gathering of about 60,000 people from all walks of neuroscience study - brain surgeons, computer modelers, psychiatric types, you name it. It's a mind-boggling avalanche of information. I talked to A LOT of people over a few days and it hit me that none of them seemed happy. They all talked non-stop about their work and seemed to have not much else to say. Several days in, my advisor said something snotty to me and I melted down into tears. I had to run outside and sit in the sun, hoping no one noticed me.

After that - and after many discussions with David - I knew that I didn't want that career. As much as I loved the subject matter, I didn't want to become one of those people.

We talked about a lot of options for me. I could go to medical school, which had been my initial intent when I started college. I could become a veterinarian, my childhood ambition. I wanted my next choice to be a better one than the first had been, so I meditated on it.

Then I sat myself down, emptied out my head of all the expectations, the shoulds and buts and what-ifs, and asked myself the question: what would be the perfect life?

To my vast surprise, the answer was Being a Writer.

See, I was never one of those people who say they wrote stories non-stop. I'd regarded my poems and essays as a minor part of my life. Though my writing teachers had encouraged me, really no one seriously suggests writing as a career.

But I had my answer, so I knew that's what I needed to do. Whatever it took, I needed to rearrange my life so I could be a writer.

What did that take? Well, I cut bait on the PhD, got my Masters and ran. I took a series of jobs in the sciences that involved writing also. I took classes from visiting writers and polished my craft. Within a few years, I was publishing regularly as an essayist. I found a job with an environmental consulting firm - the Masters did come in handy - that allowed me the flexibility to write.After my essay collection was published by a university press and it became clear I'd never make career-money doing that, I switched to fiction. Slowly and steadily, I've been working towards making a living as a writer.

The best part is that, even though the main source of my income is still from science, being a writer has sustained me all these years. It's fed me in a way that the science professions never did.

It's been a great career.