Why It's Crucial for Writers to Reward Themselves 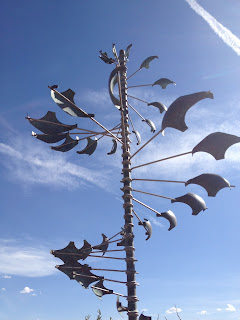 This is my new wind sculpture.

It's by Lyman Whitaker, shown by the Wiford Gallery here in Santa Fe. This is the one we picked out in motion. That animation is a bit misleading, however, because the true movement is much smoother. One thing I love about this artist's sculptures is how effortlessly the pieces flow with the slightest breath of wind - almost as if they're moving on their own.

I've wanted one of these sculptures for most of my life. Whitaker has been making them for 40 years and I've probably been looking at them nearly that long. We used to come down from Denver on spring break or long weekends, because my mother is an art nut. (I come by it honestly.) I remember being a little girl and staring up at the spinning sculptures in awe.

So, what happened is, I got my first advance check. Kensington sent the check for Book 1 (formerly called The Middle Princess, soon to be called something ELSE) of my Twelve Kingdoms series. This is not only my first check from them, for this trilogy - it's my first advance check EVER. Since my first professional publication in 1996, I've been paid for my work either upon completion or with royalties from sales. For those who don't know the business, and "advance" is shorthand for "advance against royalties." Kensington pays me ahead of time for the book that will eventually be published and will deduct my royalties from book sales from that money until I "earn out" the amount of the advance, at which point I get royalties.

It's a big step towards being Grown-Up Writer.

Those of you who follow my personal blog know I pre-spent some of this advance money when I bought my treadmill desk. I wanted to start off the new year on a healthy note, which has been working great. (At my lowest weight and body fat since early 2012, thank you very much!) When Agent Pam said she was sending my advance check (and made me tell her that she looked great in her new glasses first, which is another story), I realized that I intended to deposit the money and pay various bills with it.

Which seemed kind of wrong.

See, I've been working towards this moment - working pretty damn hard, in fact, what with the day job career, too - and it occurred to me that I should enjoy the reward. When I mentioned this idea on Twitter, a couple of people said that's the Christina Dodd Rule. She says every writer should spend his or her first advance check on something frivolous, in celebration. After all, it's a milestone event and should be treated as such. There will be plenty of opportunities later to pay bills.

So, that's what I did. Being my mother's daughter, I bought art.

Being a writer can involve long, tedious slogs of unrewarding work (see "since 1996" above). In fact, this week's topic is "How do you deal with writerly demoralization?" It's not an easy career - full of rejection and sometimes poor reviews and times when it seems Everyone Else's books are selling better than yours. There are long periods when nothing seems to happen at all. What keeps us going is hope and determination. The determination is the engine, but hope is the fuel.

Now, when I look out my studio window, I see the sculpture spinning - hope made manifest.