Dialogue and Accents - Don't Be the Monkey with the Bazooka 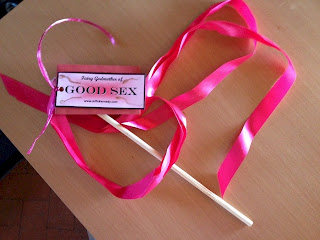 This is one of the magic wands I'll be handing out at the RT Booklovers Convention next week. They arose out of a post I did recently on my personal blog, about how I've become the Fairy Godmother of Good Sex.

I think they turned out pretty cool.

This week's topic is Dialogue: Accents/Slang/Stereotypes.

I think it's interesting that whichever Word Whore came up with this topic added "stereotypes" to the list. Because, while dialogue can be what lifts your story from boring, blank telling, stereotypes are what can make the reader throw the book across the room (even more dire today, with expensive eReaders involved) in frustration.

It's important to remember that the key component of dialogue is the "dia" part, as in two. Can be more, but you need at least two voices to have a dialogue. This is as opposed to the rest of the story, which is essentially a monologue. It's a monologue that might move from the omniscient narrator to the various POVs (points of view) of the characters. But, unless you have two or more entities talking to each other, it's all monologue.

Automatically, you can see why dialogue is higher energy, right?

It's interaction. You can explain things without sounding explainy. Dialogue reveals who the characters are and want they want - both by what the say and what they don't say. The spoken word also adds volumes to show where they come from.

We all know this. Where we come from influences how we speak. Language, first and foremost. Then accent. Then slang and word choice. Do you come from a place where they say soda, pop or Coke? How about creek or crick? Maybe kai-ote instead of kai-oh-te? There's even the famous song, you say po-tay-to, I say po-tah-to - let's call the whole thing off.

A good writer can weave all sorts of subtle cues about character into their spoken voice. How educated is she? How did that backwoods grandmother who raised him influence his word choice? What cadence do they use?

For all of this, it takes a good ear for the spoken word. Eavesdropping is a fabulous way to learn. I sometimes think writers who come from a theater background have an advantage here, because they've studied speech patterns. Having studied other languages helps, too. For example, a native English speaker says:

Whereas a French speaker says (in translation):

So, even if your native French speaker is talking in English, she might reflexively frame feelings in terms of having them, rather than being them. This can be a terrific way to show character. Or, your native English speaker might have extensive counseling experience and thus he's more likely to explain himself as "I feel sad," instead of being sad.

Does this sound like a lot of work? It doesn't have to be. If you have a sense of how your character speaks, you should be able to hear them in your head. If this isn't the case, go find someone who's like your character and talk to them. Even on the internet, the way people phrase communications in casual conversations reflects how the speak. Finally, a little goes a long way.

And this is where we come to accent and stereotype.

Okay, you've all read a book where the accent killed you, right? If you haven't, you're lucky. But every once in a while, some tremendously earnest (and likely over-researched) author, will render a character's voice in all it's ungodly misspellings, anachronisms and slang. Thus you get something like"

After one line of this kind of thing, your head aches. Before half a page goes by, you're ready to throw that expensive eReader across the room.

Okay, okay - I know some of you are ready to hurl examples at me of authors who do this really well. Once you sink into the cadence and unusual words, you do just fine. Reading Shakespeare or books in Old English can be like this, and some modern authors CAN replicate this experience convincingly.

But, really, people - unless this is absolutely Your Thing, is it worth it? You can convey a Scottish accent with cadence and a VERY occasional "lass" or "aye." I also believe this is better because, unless you truly are an expert in that language/accent/slang background, you run the extremely grave risk of Stereotyping.

See above. Obviously I reeled off that line for a supposedly Scottish character, but how did I create it? I thought of every stereotypical, cliche word, phrase and phonetic spelling I could and jammed them all into one sentence.

I don't have to explain the problem here, do I?

Okay, maybe for the Branlis in the audience, I should. ;-)

By thinking about the language and how to cram the maximum amount of accent in there, I failed to remain faithful to THAT CHARACTER. I didn't write something my character would say - I wrote something I thought a stereotypical Scot might say. A possibly deranged Scot, totally unrecognizable to anyone who's ever talked to people from Scotland.

I took a great tool and used it badly, without finesse. Like the old adage of handing a monkey a bazooka. If you have something powerful, use it well and use it wisely.