Ten Warning Signs that a Series Needs to End Already 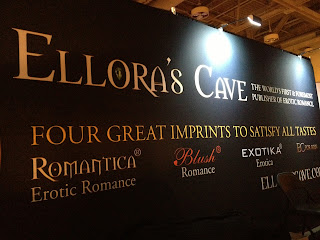 Good morning Word-Whoredom! I'm writing this from gloomy Toronto, where I've been attending the World Fantasy Convention, with sister whores Allison Pang and Linda Robertson. In a most-convenient stroke of serendipity, Ellora's Cave just happened to have a booth going at the Everything to do with Sex Show downtown. Last night I went and signed a bunch of cover flats for Feeding the Vampire and Hunting the Siren. Wild, enthusiastic and occasionally drunken readers. Total antithesis to the WFC crowd.

Both have been great experiences.

This week's theme is signs a series needs to end. Because I'm running a little low on time, I'm going for bullet points on this one.

Signs a Series Needs To End

1. Your heroine is running out of strange, new and exotic creatures to do the nasty with.

2. Your fans fondly recall Book 10 as the last one that made any sense at all.

3. You're having trouble maintaining a believable love triangle because you can't find a nursing home that allows co-habitation.

4. You've run out of additional super-powers to grant your heroine.

5. If, after eight books, your characters have still not reached the destination they set out for in
Book 1.

6. You've publicly announced that you were done writing the series three books ago, but couldn't resist the money the publisher offered.

7. You're now writing about the continuing exploits of your original heroine's great-grandchildren.

8. The original author's name no longer appears anywhere on the cover.

9. You're less concerned with whether your heroine is becoming a monster than in finding any human qualities at all.

10. If your series is recognized by anyone reading this list.

Why yes - I do plan to revisit this list throughout my writing career!