Some Do's and Don'ts of Writing Leftovers 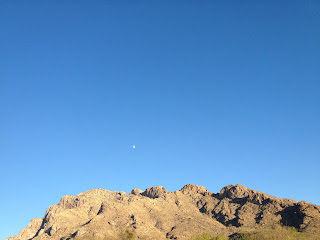 The moon over Pusch Ridge in Tucson, where we spent Thanksgiving. Gorgeous weather.

The thing about spending a holiday like our U.S. Thanksgiving at someone else's house is, you don't really get to have leftovers. My mom sent us home with some turkey and a loaf of my sister Hope's pumpkin bread - all of which we've already devoured.


Leftovers get a bad rap for being the same thing all over again, boring - possibly uneaten the first time around because it just wasn't all that tasty. And leftovers can be a bane, overcrowding the fridge and kitchen cabinets, turning into rotting food that must be thrown away, along with a soupçon of guilt.

But the right kind of leftovers can be the perfect meal-starter. They're the beautifully roasted turkey bits. The already-chopped vegetables. The gravy that takes an hour to simmer, ready to be heated and served.

Writing leftovers can be the same way. So here are a few of my Do's and Don'ts for using those leftover chunks of prose.

1) DON'T use it just because it's there. Making yourself eat something won't save those starving children in Africa. Using something you wrote simply because you hate to waste that effort won't make for a good story.

2) DO repurpose the staples. My aunt is famous for her post-holiday Turkey Tetrazzini. Nobody minds having it because it no longer tastes like Thanksgiving turkey. I once ripped apart an essay that just never worked and slid the pieces into another essay as a kind of refrain. The new piece won awards and was well-published.

3) DON'T just recapitulate the same meal. You might have enough of everything to do another Thanksgiving meal, but everybody already had that. It might have been wonderful, but it's over now. I'm thinking of an author who paid to have her out-of-print book reprinted and re-marketed. But it's the same book. It's hard to get people excited about that.

4) DO make the good stuff available. Freeze those uneaten dinner rolls in Ziploc baggies. Store uneaten gravy in individual tupperware containers. Those veggies from the relish tray can live in the fridge for a while. Go ahead and make your backlist available in digital versions. It might be the perfect thing when someone wants a snack.

5) DON'T succumb to the urge to fib and tell people it's not really leftovers. They can always tell - and then they're mad at you for trying to trick them.

6) DO use leftovers in creative new ways. Those mashed potatoes can be mixed with some onion and flour and made into potato pancakes.That funny character you simply had to cut from the last novel might be ready to star in their own story.

7) DON'T insist on using leftovers because you're too cheap or lazy to do something fresh. DO be willing to recognize when something is done-for and discard it with a clean conscience.

Any other Do's and Don'ts out there?