How to Find the Scary in a Story 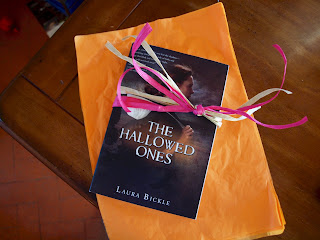 This week's topic is "Tips for Writing Horror/What Makes a Story Scary." And I thought to myself that it's too bad that Laura Bickle, former Word Whore who went over to the dark YA side, isn't here as this topic is right up her alley. She writes scary very well. Me? Not so much.

Then I looked over at my *two* copies of her new book THE HALLOWED ONES and inspiration struck! See, somehow in an overabundance of enthusiasm, I ended up ordering three copies of her book. One I knew was a duplicate and I redirected it to go to my sister and nephew. The other was a total surprise. But its fate was clear: Giveaway Book!

So, here is Laura to tell you what I can cannot: What makes a story scary. And I will giveaway this copy to a lucky commenter who responds by Midnight on Halloween! Sorry international folks, because this is a paper copy (~sniffs in disdain~) I can't send it to you without breaking the bank.


Take it away, Laura!

Scary stories have existed since humans first gathered around campfires and made shadows with their hands against the firelight. Flames outlined frightening figures and beasts, gnashing teeth and slashing tails. Listeners shrank close to each other and edged just a bit nearer to the warmth and the light of the fire.,

I think we know a scary story when we hear it or read it, when it quickens our breathing and causes us to leave the lights on after dark. But what really makes a story scary when we’re crafting it? Is there a way to consciously figure this out as we put it on the page?

I think so. I think the first step is dealing with a topic that scares you. If we don’t feel the fear, we can’t expect others to feel it or respond to it authentically. We gotta deal with topics that scare us in order to most effectively communicate that fear. What scares you? Is it being alone? Being trapped? Getting lost? Those clown slippers that your grandma gave you when you were four?

You think I’m kidding with that last one, but only sort of.

Find something that really disturbs you, and you’ve got a good start. Think about the stuff that keeps you awake at night. You’ve just got to be willing to really force yourself to examine it.

And I don’t mean something that shocks you. A shock is a shock and is good for what it is. It’s a jolt and it leaves your jaw hanging. It’s a great tool to open or close a chapter with a hook.

But fear is something different. Fear is deeper and it lingers. It gets inside your ear and crawls around your head like a spider. A shock is a trick, a device, a thunderclap. Fear is a theme. It’s a storm. It can be quiet or violent, but it lasts longer and is much more interesting to work with.

The second part of creating a scary story is translating that individual fear to a universal fear. As humans, there are a lot of atavistic fears we’ve got, rattling around in our collective unconscious. We’ve all heard of the common fears, like snakes and spiders. They’re relics of our primitive attempts to survive, when such creatures could bite us and leave us twitching and drooling. Those critters appear pretty darn often on the creepy movies of the week, often in giant form. They’re also a really good reason why I make a lot of noise before opening up the shed to drag out the lawn mower.

But what about the really deep stuff that’s still relevant to modern life? There are a lot of fears that have been around a long time and aren’t going anywhere anytime soon. The dark. Imprisonment. Loss of youth. Abandonment. Powerlessness. Screaming and no one being around to hear us. Being buried alive. Contagion. Being separated from the herd and forced to survive on our own. Injury. Death with no happily ever afterlife.

We’re wired to fear these things. If you can relate your individual fear to something larger that we all share, then it can be worked into a theme, to something that will feel real to you.

Take your small fear, feel it, and blow it up big in the format of a story. Really touch it, taste it, and feel your pulse pounding in the back of your throat. Challenge yourself.

And if you are afraid, when you start making shadow puppets on the walls, your reader will be, too.

Laura Bickle’s professional background is in criminal justice and library science, and when she’s not patrolling the stacks at the public library she’s dreaming up stories about the monsters under the stairs (she also writes contemporary fantasy novels under the name Alayna Williams). Laura lives in Ohio with her husband and a herd of mostly-reformed feral cats. THE HALLOWED ONES is her first young adult novel. Get the latest updates on her work at www.laurabickle.comwww.laurabickle.com.

Email ThisBlogThis!Share to TwitterShare to FacebookShare to Pinterest
Labels: Jeffe Kennedy, Laura Bickle, The Hallowed Ones