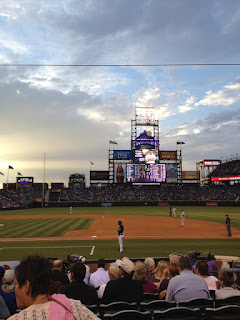 I took this photo last week at Coors Field in Denver. On a gorgeous summer evening, we got to take in an excellent baseball game - and watch the Rockies defeat the Dodgers. An unusual event for this season, I understand, and a victory that comes far too late to make any difference. But it was very fun and they played well.

As you can tell, I don't really follow baseball. Or any sport, for that matter. Sometimes I think I'm lacking the gene for it. I've never particularly cared about identifying myself with particular colors or sports heroes. The closest I ever get to being a true fangirl is for authors.

But it never occurred to me to write fan fiction.

Of course, I grew up in B.C. - Before Computers - and there was a much greater distance between me and the printed page. (By this I mean, before easy public access to computers. For me, the first ones were the Apple computers in my high school computer lab, where I learned DOS.) The authors who wrote the books I loved were mysterious and nigh-mythical beings who lived in my mental Mount Olympus - immortal, remote and all-powerful. I really didn't even write letters, as I knew some people did. I think that's because, very early on, I wrote Marguerite Henry a gushing, enthusiastic 8-year old letter about how I wanted my own colt to break and she responded in this very stern way about how a girl in the suburbs couldn't possibly take care of a horse, much less take on such a monumental task of molding a young one.

(Looking back, I think it must have been a standard letter she sent to all the bright-eyed, gushing young girls inspired by her horse books to think they could do that, too. But, knowing what I know now, I'm surprised she took my youthful dreams so seriously that she felt the need to correct them. Ah well.)

So, even though I composed countless letters to Anne McCaffrey, I never wrote them down or sent them. And, though I spun a thousand tales in my head based on her world and characters, I never made them into stories of my own.

I'm sure 95% of you reading this know far more about fanfic than I do. I can pinpoint exactly when I became aware of it. It was in 1998, when the Barenaked Ladies released their album, Stunt, and I asked my old high school boyfriend, Kev, with whom I bonded over those very same DOS computers, what the lyric in One Week about "Sailor Moon" referred to.

(Kev has long been my go-to guy for popular cultural references. And he doesn't make fun of me either. Much.)

He explained Sailor Moon, but this was before Wikipedia (launched in 2001), so there wasn't much way for him to let me see for myself. So, yes, he sent me to the fan fiction forums.

This was an eye-opening experience for me. The sheer volume of the stories posted. The wild variation in theme. You all know that I'm far from a prudish reader (or writer), but some of the kinkier tales shocked the hell out of me.

Mostly, the whole discovery shifted my view of the world. No longer were characters and worlds these inviolate, sacred beings and places created by those author gods I worshipped and could never touch. Instead, all these people - and I discovered there was fanfic for nearly everything - had taken those stories and ran with them. Sometimes spraying blood, kink and gore in all directions.

I confess that, yes, part of me was bothered by it.

I did see it as a violation then. The practice went against what I viewed as essential rules about the integrity of copyright. I believed for a very long time that a story belongs to the person who created it. That there's something fundamentally wrong about taking a piece of it and changing it to suit yourself.

But I've come to understand over time, how many authors got their starts by writing fanfic. Just as painters copy the great creations of the masters, or bands get going playing covers of the hits, many writers develop their chops by working in someone else's world. Not unlike Prometheus stealing that fire from Mount Olympus, those writers may have snatched a bit of that divine glory and used it to create something of their own.

Where do I fall out these days? First of all, I don't think any author can stop fanfic - as some have tried to do. I also think there's nothing wrong with it, as a way to learn. I do believe a fanfic author shouldn't try to sell their work. While a cover band is selling the entertainment of their muscianship, a writer is selling the story. For me, a story is hugely about characters and world, less so what they actually do.

Steal a bit of that divine fire, sure. But then go build your own barbeque pit with it. That is the true joy of creating.