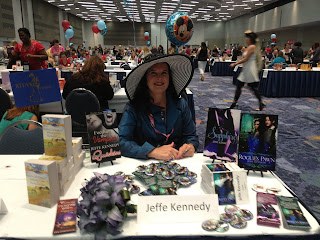 I've just dragged myself home from the RWA National Convention, where I participated in the gigantic literacy signing benefit for the first time.

Yes, it was fabulous.

But RWA - Romance Writers of America - is my home territory. This was my fifth year going and I've been heavily involved in my special interest and local chapters. Plus, it's pretty much all girls. There's a few guys here and there, but functionally it's 2,000 women involved in some branch of romance writing and publishing.

It's really the only thing I do that's like this. Maybe it's akin to the old sorority days, but this is better because it's so profession and career-focused. They are my tribe.

In November, I plan to go to World Fantasy Con, which will not be like this. In fact, my smart friend advised me not to go. "They're not your audience," she told me. And then she told me several stories about female authors being harassed at the more hard core science fiction and fantasy conventions. I thought about this and decided that they won't be my audience if they never meet me.

I'm a little nervous though.

It reminds me of the old Dennis the Menace joke - the clubhouse with the "No Girls Allowed" sign. My feelings date back to my own childhood. That awful phase we all went through, when the boys decided that all girls had cooties (an indefinable, icky, yet dreadfully contagious thing) and that we were something to be disdained.

(Much later in life I discovered that "cooties" actually referred to head lice, but we never knew this as children. Nobody could ever tell me what a cootie was.)

I know there's lots of psychology behind this. The boys were distancing themselves from their mothers and moving into the world of men. They needed to create distance to cement their developing masculinity. But I also recall my teachers telling us about studies showing that, while girls could see themselves as boys, boys could not see themselves as girls.

The message was quite clear that being a girl just wasn't as good.

But hey - we all grew up, right? The boys rediscovered the girls and all the lovely thrill and magic of blending ourselves. And it turned out that some of the boys wanted to be girls enough to have operations to get there. Nothing was so black and white.

Still, there remains a contingent of boys who seem to be guarding the ever more rickety clubhouse. They don't want girls writing SFF and getting all that sticky, kissy shit in it. Except for maybe the Ginas, who don't act like real girls anyway. It's more okay if a girl author writes kick-ass stuff. But if we're the Margarets, starry eyed over love and romance? We are emphatically sent home, with ridicule chasing us down the street.

It's significant, I think, that I'm using an analogy that dates back to 1952. The world has changed a great deal since then. Change, however, happens in fits and starts, with little backwater stagnant pools that get left behind. Eventually those pools dry up. Or get washed into the fast-moving water of the greater flow.

Last night, a Carina Press book won RWA's RITA award. This is RWA's version of the Oscars and this marks the first time a digital press has won the award. (Another epress, Avon Impulse, also had an award winner.)

The world turns and times change.

I first read that line in Anne McCaffrey's book Dragonflight, one of the seminal SFF books, series and authors out. The line is a recurring theme and it became part of my frame of reference.

We aren't kids on the playground anymore. No one has cooties.

And the clubhouse is big enough for everyone.