The good, the bad, the known, the revealed: an appreciation of awesome characters! 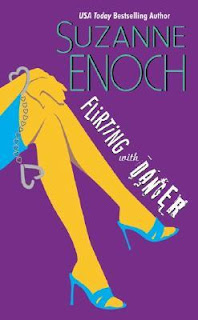 
I tend to split the universe of characters I love into two parts – known characters and slowly-being-revealed characters. That’s not an original idea of mine – it’s something I picked up from a writing teacher that has always been useful. Known characters are transparent to the reader, often the narrator. There may be mysterious or unrevealed aspects to them, but these characters are never mysteries. You never wonder about their integrity or if you can trust them or what the deal is with them.

Slowly-being-revealed characters are characters who are mysteries within a book, wild cards, and part of the fun is seeing the layers get peeled off of them.

So, I’m picking one of each.

One of my favorite-ever known characters is Samantha Jellicoe, the reformed cat burglar heroine of Suzanne Enoch’s Samantha Jellicoe series. Samatha is strong and sexy and smart, and in the first book, robs a billionaire and falls in love with him, and decides to leave the criminal life behind. It’s really fun. I love how she has this ongoing central struggle through subsequent books—the call of the dark side. The lure of going back to cat burglaring.  She’s addicted to danger but trying to stay straight.

That’s similar to the reason I love Eve Dallas (who was picked by somebody ELSE). That is, for a known character to be so full and strong, but actively overcoming demons on the page as the plots and books march on. That is really compelling to me. In the case of Sam Jellicoe, it’s kind of a light, frothy struggle – the series is a kind of comfort read of mine, frankly. Eve Dallas deals with darker demons but still, that series is a comfort read, too. I think there is familiarity in an ongoing and well-known daily internal struggle as outward life goes on. I think we all have those. Both of these character just call to me as a reader, and I'd be so proud to have written them.

For my favorite slowly-being-revealed character, I used to really love Eric Northman of the Sookie series—how mysteriously good/bad he is, but he has been greatly eclipsed by Nicholas Brisbane of Deanna Raybourn’s Lady Julia Grey series, Victorian era romantic mysteries. I won’t reveal much about him, but he is this wonderful bundle of intensity and mystery, and I read the series as much for the mysteries as to learn more about the puzzle of smolderingly awesome Brisbane.
Posted by Carolyn Crane

Carolyn Crane
I am a RITA-winning author of romantic suspense, urban fantasy, and other tales of love and adventure. I’ve been published by Random House and Samhain, and I presently go the indie route. I work a straight job as a marketing writer, I love to run and read in bed, I’m passionate about helping animals, and I make my home in Minnesota with my husband and two cats.