What Makes a Movie a "B" Movie? 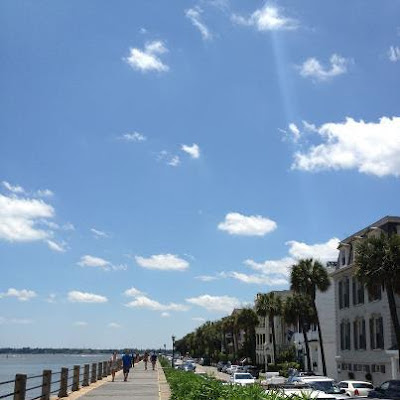 I'm in Charleston, South Carolina this weekend, doing a bit of book research (for the upcoming Platinum). It's fun to be writing this post in a little historic courtyard with a pineapple fountain splashing next to me.

So, this week's theme is our favorite B-movie. The Word Whore who chose this topic also helpfully specified "/bad movie." While I was pondering which of my favorite movies counts as a B-movie, I got to thinking about the term "B-movie" and wondered if it isn't really one of those antiquated descriptions that just doesn't apply anymore.

Turns out, that is the case. Wikipedia (it *could* be true) says this:

A B movie is a low-budget commercial motion picture that is not definitively an arthouse or pornographic film. In its original usage, during the Golden Age of Hollywood, the term more precisely identified a film intended for distribution as the less-publicized, bottom half of a double feature.

Which is kind of what I thought. The original usage applies today as much as the flipside single - the song on the B-side of the 45-record with the hit song on the A-side.

However, we continue to refer to B-movies:

In its current usage, the term has somewhat contradictory connotations: it may signal an opinion that a certain movie is (a) a genre film with minimal artistic ambitions or (b) a lively, energetic film uninhibited by the constraints imposed on more expensive projects and unburdened by the conventions of putatively "serious" independent film. The term is also now used loosely to refer to some higher budgeted, mainstream films with exploitation-style content, usually in genres traditionally associated with the B movie.

And this bit is why I think a B-movie isn't necessarily a "bad" movie:

In its post–Golden Age usage, there is ambiguity on both sides of the definition: on the one hand, many B movies display a high degree of craft and aesthetic ingenuity; on the other, the primary interest of many inexpensive exploitation films is prurient. In some cases, both may be true.

So, this rubs me wrong. You all know I object to genre being equated to inferior effort. And I'm all about prurient. Looking this up reminded me of an article I read recently, Literary Revolution in the Supermarket Aisle: Genre Fiction Is Disruptive Technology.

It's a fascinating article in that it compares genre fiction to indie technology that takes risks the big companies won't, and thus is the center of innovation, allowing the indies to eventually supplant the corporate giants. Like Apple did to IBM. Anyone out there got an IBM computer?

I really love this idea that genre, in literary or movie format, can take risks and stray outside conventional boundaries. So what is my favorite movie that falls into this definition?

Sure it's big budget and has Hugh Grant and Julia Roberts in it. But it's also "just" a romance. Worse, a romantic comedy with a happy ending and no one dies of cancer at the the end. The lovers end up together, no tragic parting, and there's no realization at the end that life is without meaning.

And it's a brilliantly funny movie - a grand example of story telling.

I love that it's a reverse Cinderella, that Julia is a rich and famous movie star who sweeps the impoverished and unprepossessing Hugh off his feet. I truly believe in their connection and in what they bring to each other's lives. The supporting cast of characters are real, funny and richly realized. And the complicated chase ending, with public declaration of love could be so cheesy and derivative, but instead it's fabulous and perfect. I bet I've watched it ten times, and each time I catch something new.

Not bad for only a rom com.