How to Have the Happy 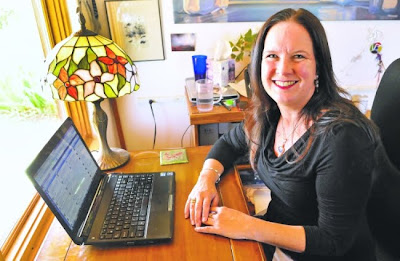 First things first - I'm in the newspaper today! The local paper, The Santa Fe New Mexican, asked if they could do a feature on me. I checked my very busy schedule and managed to squeeze in an interview.

I'm kind of stumped by today's topic, on the one that/who got away.

I don't fish and I'm not much for regrets. I'm trying to think of something, or someone, I've lost that I fought to keep. I suppose I'm lucky that way. Blessed even.

I've lost people and beloved pets to Death, that final and inevitable loss. But I know better than to fight it. Those haven't so much gotten away as moved on. I hope to find them again someday.

My heart got broken by one charming boy, dramatically and twice over. At the time, I wept for that loss, but now I know he would have been terrible for me. Things turned out just as they should have.

I think of moments that escaped me. Chances for success I came close to but didn't quite catch hold of. Like the agent who contacted me after a review of my essay collection, wanting to see what I was working on. It wasn't what she wanted and that door closed. But did it really get away from me?

The article I linked to above implies that I walked away from a science career, which isn't entirely accurate. That degree still pays the bills. But I did give up that dream - the rosy hopes for a Nobel Prize and a place in the annals of science. Still, that isn't the trophy fish that slipped the hook. I weighed it, thought about the price I'd pay and cut bait. Amusingly, given the metaphor I'm using today - I've always referred to my quitting the doctoral program as "I cut bait, took my Masters degree and left."

In many ways, this might be a reflection of my trust in the universe, that things happen as they should. If something I wanted fell through my fingers, then I wasn't meant to have it. More, it wouldn't have made me happy to have it.

And having the happy is the most precious thing of all.

Email ThisBlogThis!Share to TwitterShare to FacebookShare to Pinterest
Labels: choosing the happy, Jeffe Kennedy, the one that got away