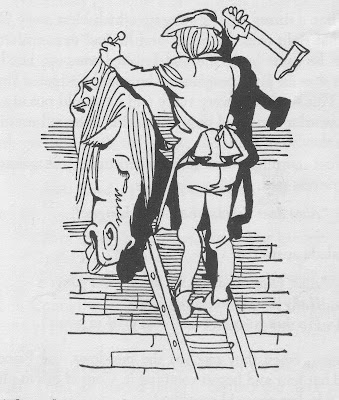 I bet you all thought I was going to say my favorite fairy tale is Beauty and the Beast.

Clearly that one is right up there. After all, my obsession with what the Beast *did* to the nubile, young Beauty all those nights they were locked up together in his castle led to me writing Petals and Thorns. Turns out, in my world, he did quite a lot of very naughty things. 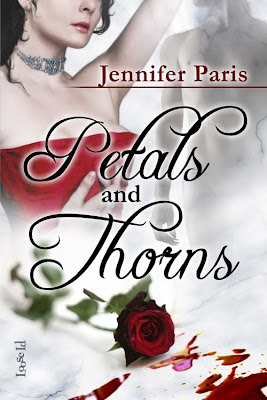 But, even though I love that tale and how it explores the nature of the beast and the true meaning of beauty and, best of all, the opportunity for transformation, it's not my all time favorite.

No, my favorite tale is sad and gruesome. For the life of me, I still don't know why I like it best. It's one of 54 stories in my copy of Grimms' Fairy Tales, given to me by mother for Christmas of 1972, when I was six. I know this was the occasion, because she wrote it in the front of the book. (And Mom? You signed it "Mother," which I find very funny!)

The image above is from the story: The Goose Girl.

Yeah, I know. No one else has ever heard of it, either. Believe me, Disney never touched this one.

So, the sweet and beautiful princess is sent off by her mother, the queen, to marry her betrothed prince. On the way, her waiting woman gets progressively meaner and finally forces the princess to strip down and trade clothes with her. The princess loses the drops of blood her mother sent with her for protection and is totally powerless. The waiting woman marries the prince and the princess, lacking ANY abilities whatsoever, is sent to help the Goose Boy. The waiting woman also has the princess's talking horse, Falada, killed, so he won't spread the tale. Interestingly, he's the only character in the story who has a name. The Goose Girl asks for his head to be nailed over the gate she passes through daily, herding them geese along. Fortunately, Falada's death does not interfere with his ability to talk and the story comes out. The princess weds the prince and the waiting woman receives one of those particularly horrific punishments these old tales were so good at meting out.

There's a lot of logic missing in the story and it's one I wish I could track down an older version of. I suppose this hits a lot of my "themes." Separation from the mother and maternal inheritances. The faithful horse who dies, but persists in spirit. (Or, at least, in a nasty talking head.) Power - who has it and who doesn't.

Really, upon reread, the princess is a complete ninny. And yet, something about her appealed to me. The beauty and refinement unrecognized and unappreciated, yet discovered anyway.

I can't help but notice that my thread in The Middle Princess, which has the mother leaving a message in blood, might very well come from this story.

The thing about fairy tales is that they are so much about symbolism and archetypes. The stories work on us on the subconscious level, speaking to something in us that isn't about logic, but is all about the feel and the deep connection.

And now I'm noting down "Falada" - must use this name!

Email ThisBlogThis!Share to TwitterShare to FacebookShare to Pinterest
Labels: Beauty and the Beast, Jeffe Kennedy, Petals and Thorns, The Goose Girl, The Middle Princess