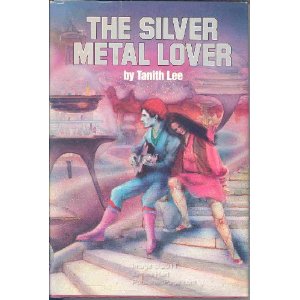 It seems to be that one persistent question asked of authors is who their literary influences are. Clearly we ask this even of each other. I've always been impressed, over the years, when bands that are interviewed can reel off three to five musical influences without missing a beat. Now I understand why.

They get asked that question ALL THE TIME.

Fortunately the possible answers to this question are as countless as the stars in the sky or grains of sand on the beach. Or at least, as many as the books on the shelves of the Hampden Public Library in Aurora, Colorado. Or the offerings of the Science Fiction Book Club.

That's right - they have a website. Am I the only one who's surprised?

I was all set to give a little history lesson here, but it turns out they're still going. Who knew?

At any rate, when I was a kid, I'm guessing starting around 10 or so, I belonged to the Science Fiction Book Club. It was one of those "free" deals where they mailed you one or two books each month. If you didn't want them, you could send them back. Otherwise you were automatically billed for them. I think this was a popular business model in the 70s - seems like there were all sorts of companies who did this. The bite, of course, was that if you forgot (often) or failed to keep track of time (hello - I was 10) and didn't send the books back, they were yours. It was kind of shopping by omission.

My mom would get aggravated over my growing bill and would make me pay her back. I got serious about saving my allowance, doing chores for cash and eventually baby-sitting my little heart out.

Because it turned out that I loved most of the books they sent me.

I read Anne Rice's Interview with the Vampire through this club. I read a lot of books that were likely very inappropriate for my age and I discovered authors I never would have otherwise.

That's where Tanith Lee comes in.

Yes - that seems to be her primary online presence. Some other creep is squatting on TanithLee.com, a practice I just abhor. Special circle of hell for those people. But, like many authors of her generation, she seems to have no other website or blog. Sigh.

At any rate, I read The Silver Metal Lover and was spellbound. It starts out, somewhat famously, like this:

Mother, I am in love with a robot.
No. She isn't going to like that.
Mother, I am in love.
Are you, darling?
Oh, yes, Mother, yes I am. His hair is auburn, and his eyes are very large. Like amber. And his skin is silver.
Silence.
Mother. I'm in love.
With whom, dear?
His name is Silver.
How metallic.
Yes. It stands for Silver Ionized Locomotive Verisimulated Electronic Robot.
Silence. Silence. Silence.
Mother....

The story was futuristic, with a blend of the surface eutopian/core dystopian society Lee does so well, with a love story. All told with beautiful, metaphorical language I often had to read several times to understand. Fabulous!


There was Sometimes After Sunset, which combined vampires with Mars - something my young mind found twisty and amazing. This bit about a malicious flower delivery has always stuck with me:


The buzzer went. I walked stiffly to the door and opened it. A boy about fifteen, in white overalls, was on the porch. He carried a crystal box, a transparent coffin full of green Savior roses.

"Miss Kerwow?"
"That's not my name."
"It isn't?" Concerned, the boy gazed at the docket on the box. His eyes had a puffy, almost tearful look of disorientation. He was at the age of confusion, when you can only get through by a series of previously planned moves dependent on predicted responses. A reaction out of sequence could derail. I'd been meant to cry out Why, yes, and make a balcony of my arms and breast for the flowers.

There's Biting the Sun, which is another dystopian lurking beneath the apparent eutopian, where the heroine moves from just plain silly to someone heroic. That journey is echoed in Heroine of the World, an epic story of a young woman who transforms herself into the perfect bait, to take the ultimate revenge. Red as Blood, Tales from the Sisters Grimmer got me going on twisted fairy tales.

But the one that really sticks in my head, that I've read over and over, is The Electric Forest. In this book, the heroine is horribly disfigured from congenital defects and is offered the opportunity to occupy a perfect, beautiful body. The story is layered with switches and double-crosses that truly wowed me. Most of all, Lee infected me with the use of color. Like the first description of her "new" body:

There was a woman in the pillar. She would appear to be about twenty-two or three years of age. She would appear to be alive, but surely could not be. Naked, she was like some glowing incandescent substance. Her open eyes were dark blue neons. Lustrous hair, a fierce blue essence of blue-in color, poured back from her forehead. The hair was cut precisely level with her shoulders, the heavy, mathematically straight mass of it just framing their witness. But she was not any sort of a mannequin. She had nails, lashes, a fine bluish blush of down beneath her navel, leading into black at the pubes. The fawn nipples on her breasts were like furled buds. And she was dusted all over with a pollen of faint fawn freckles. She was beautiful. Beautiful.

Now we know why my editor had me trim down the references to blue in Rogue's Pawn. Ahem.