Missives from the Land of No TV 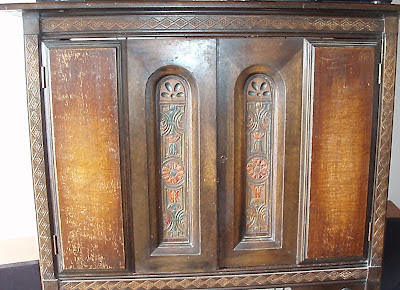 I might be the worst possible Word Whore to kick off our week on most loved and hated TV shows, because this is my TV cabinet.

Oh, there's a TV in there, but it's usually hidden away unless we're watching a movie. We don't have cable, satellite or even an antenna. We not only don't watch TV shows, we really can't unless we get them from Netflix. Which we do from time to time, especially if people really wax on about one show or another.

I know this annoys people, when I say we don't watch TV. It makes us sound like douchebags. But we made a deliberate choice many years ago (around 15 years ago) to disconnect the cable and only watch what we made a considered choice to watch. I viewed it as breaking a habit. We were also paying off bills at the time, so throwing that considerable chunk we paid each month for TV at a debt instead made good sense. Without TV, we spent our time in other ways. We watched movies we rented and when they were over, we read or worked on projects. After a while, we didn't miss it at all.

We never went back.

This was a fairly easy choice for me because I'd been trained early on to minimize TV-watching. My mom only let me watch an hour each day, which I nearly always used up on the 4pm reruns of Star Trek. Oh yeah, baby. Star Trek and the later reboots will always be among my most loved TV shows.

So, now, we sometimes Netflix shows, which can be a funky experience because I'm always a season behind everyone else. When people are tweeting spoilers about this season's Castle (a show I do enjoy, thanks to sister Word Whore KAK's suggestion), we've just gotten last season's on disc. We followed Californication all the way through - David just loves some raunchy David Duchovny - and United States of Tara. We liked Glee, House, Nurse Jackie and The Tudors. A few others we've tried and bailed on pretty quickly. However, since I let all of you filter for me, I rarely see a show I hate.

Lately I'm hearing I should watch Downton Abbey, so it's in our queue.

So, you all tell me: what am I missing?