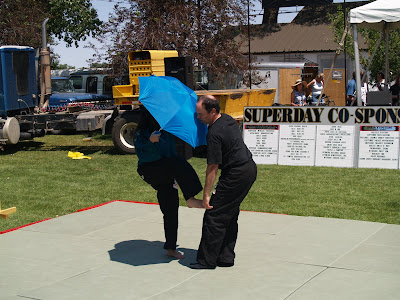 A little while back, I made a remark on Twitter about reading action scenes.

THIS particular remark started a conversation, as opposed to all my remarks that go unread, unheard, like a tree falling in a forest where not even the least bunny is squished. I said that I tend to skim the fight scenes because I find them generally dull. She swings her vorpal blade, he ducks and fires up the light saber. She spins, kicks, falls. He punches, grunts, dives.

I pretty much skip to the end to find out who wins, so, with plot point in hand, I can continue the story.

Other people - with surprisingly virulent opinions on the topic - said that no, they skim the sex scenes and the fight scenes are the interesting, exciting bits.

Hmm. See, I come from the side of the campfire that just can't see how a fight scene could be more interesting than a sex scene. Not that I haven't read some bad, boring sex scenes. They're out there. But they're hardly the Tab A into Slot B descriptions that detractors like to drag out.

I suspect part of it comes from a fundamental discomfort with sex for many people. The cultural norm that lets kids see brains blown out but not naked breasts. Movie censoring is predicated much more on parsing what sex is shown, as opposed to exactly what kind of dismembering. And isn't it interesting that sex acts are private but violent ones are public?

With both sex and action scenes, where the danger is falling into stage direction rather than storytelling, the key is the emotional changes that transpire. They're both about interpersonal interaction, not just "they fight" or "they have sex."

I expect those of you out there who love to read and write the action scenes will tell me that a great, big explosion is reason enough. Marcella insists that explosions are plot points.

For me? I stick to what I know. The golden rule of writing. Yes, that's me above, performing my amazing umbrella trick at a demonstration. I studied internal martial arts for some years and this was a neat little bit of deception and side-step. An aggressive man approaches, she turns away. He pushes into her space - she pops open the umbrella and, under its cover, snaps a kick to his balls.

That's my action scene, quickly over. I'd always finish by strolling away with a smile while I twirled my parasol.