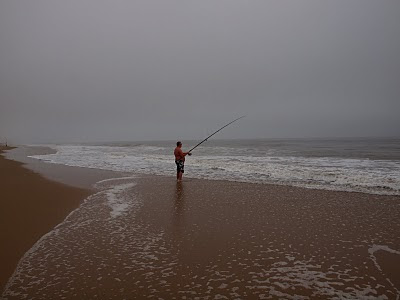 I saw this guy fishing on the beach in Maryland both yesterday and today when I took my morning walks. Today I asked him what he's fishing for, because David wanted to know. He grinned, shrugged and said "not much!"

Then he told me how he could catch most anything out in these waters. And how he comes out pretty much every other weekend, to fish in the surf.

If I lived nearby, I think I'd want to do something similar.

I envision a life where I could walk on the beach every morning. Nothing extreme, just an even pattern of enjoying a place. It wouldn't matter if i caught anything or not.

This week's theme was supposed to be what we love and hate about four-letter words. (Curse-words, for you non-US types.) But Laura, ever the organized Word Whore, already wrote her post about what she loves and hates about writing. (It's the way the topic was phrased on our calendar.) I peeked at her post to see what tags she chose and saw how she took the topic in a different direction. Since I usually set the tone for the week, I thought this time I'd accede to her take and leave the four-letter words alone.

Love and hate are passionate feelings, though. They are the extremes. Jokesters like to point out that they are four-letter words, implying they carry the same punch as the traditional curse words. Frankly, they aren't words I use often.

Not so much because they represent passionate feelings, but because they don't mean much. They get so broadly applied, so flung about and plastered to such a wide range of emotions that the words have lost all meaning.

As for hate, I don't think I have much of that in me. Mostly I think of the going away. Leaving the ocean, being away from home. I know it isn't really hate like most people think of it, but if hate is the opposite of love, then that's how it manifests for me.