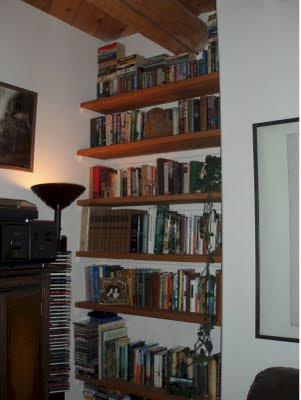 I've always been a reader. Since I sat down in front of the first episode of Sesame Street three months after my third birthday, I've been stringing the letters together to read the words. I astonished my mother by sounding out S.A.F.E.W.A.Y a few months later (our local grocery chain). By the time I was six, I ended her reading to me before bed by looking over her shoulder and correcting misses.

After that I was Miss Nose in a Book.

I will never be one of those writers who claims to have been penning stories since I could pick up a crayon. I was too busy working my way through every book in the children's section of the library. Then the teen section. I exhausted those and started in on the adult shelves by the time I was twelve.

And yet, one of the standard author questions that I hate the very most is: who are your influences?

Um, how much time do you have?

Charlotte's Web was the first novel I read by myself - the very one my mother tossed in my direction after I corrected her one too many times. I read every book you'd expect a little girl to read, from A Little Princess to Understood Betsy to Judy Blume. I inherited all these old books from family, so I read the entire Five Little Peppers series and all of the "color" fairy tale books (olive, pink, etc.).

Then I discovered fantasy. Narnia was okay, but Anne McCaffrey's Pern books blew me away. Those led me down a dark and winding path of authors like Anne Rice, Tanith Lee, Zenna Henderson, Patricia McKillip, Vonda McIntyre, Robin McKinley. From there I followed branches into sci fi with Jack Chalker, Orson Scott Card, Isaac Asimov. Meanwhile Anne Tyler's Dinner at the Homesick Restaurant got me going on what I thought of as stories about "ordinary people." I fell in love with Barbara Kingsolver, A.S. Byatt, Ann Patchett, Carol Shields, Margaret Atwood.

For fun I hit the romance novels: Kathleen Woodiwiss, Linda Howard, Nora Roberts, Jayne Ann Krentz. I read Anais Nin, The Story of O and the collected works of the Marquis de Sade. I followed the fantasy crossover writers into the new era, from Mercedes Lackey to Laurell K. Hamilton to Jacqueline Carey. I love both Anne Bishop's and Stephanie Meyer's books. I admire William Gibson and Gregory Maguire and Mary Doria Russell. I got heavily into the memoirists for a while, Mary Karr, Tobias Wolff, Terry tempest Williams, Michael Ondaatje.

What am I reading right now? Waiting by Ha Jin. Magic Slays by Ilona Andrews is up next.

I am tempted to do two things, when people ask for my influences. I might just type up a list - a very long list - and hand it to them. Or I might just randomly pick one author each time and say THAT ONE.

After all, it would be true.