Could you do it? 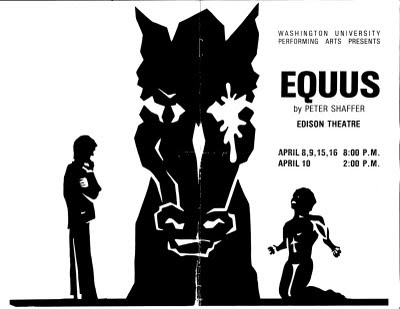 In the spring semester of my senior year in college, I performed in a production of Equus.

I had no business auditioning for, or being in, a show at that time in my college career. I was (supposed to be) writing my honor's thesis, applying to and deciding on grad schools, winding up terms of groups I'd become director of and handing those things over. Not to mention making sure I passed Immunology so I could get my damn degree. I auditioned anyway. I couldn't help myself.

Now, I was never much of an actress. Another gal, let's call her Patty, received the lead role. I became the nurse, with a grand total of three lines. In most productions, that would have limited my rehearsal time and involvement with the show. Not in this case. Not at all.

See, the director was the very ambitious and very new director of the theater department at our private liberal arts school. He had IDEAS. For his production, he wanted the entire cast (like 10 of us) on stage all the time. When not actively in a scene, we sat in big chairs in the background, like a jury.

For those who don't know the show, Equus is about a disturbed young man who is committed to a mental hospital for blinding six horses because he didn't want them seeing him have sex. The play is mostly about his conversations with his therapist with lots of flashbacks.

Any any rate, Patty, this cute blond freshman, was to play the love interest. The girl who was getting naked in the barn with the disturbed young man. The director told her and Darren, who played DYM, that they would have to be naked for that scene. Patty said she didn't think she could do that. He said she'd get used to the idea and cast her anyway.

Everyone could see this would be a huge mistake.

As we progressed through our twelve-week rehearsal period, (for those of you who've done theater, yeah, you read that right - TWELVE weeks) Patty came no closer to getting used to the idea. I was even assigned to coach her though it. Why me? Lord only knows. I took her shopping for the underwear she'd have to strip out of. We talked. We went through the ins and outs, how it's not really her, if she's in character it's just her and this great guy in the barn. Turns out she's a virgin. Just a mess all around. And it's way too late at this point to recast this girl who should never have been cast.

But, hey, she looked the part.

Meanwhile, we're all in each other's laps, spending hours together every evening for twelve weeks. Darren had to overcome some things, to do the nude scene. He had to be naked on stage for quite a long time, since that's the crux of the story - his fugue state after Patty runs off and the blinding of the horses. It was an intense and difficult scene to do, exposing himself on so many levels.

Inevitably it became our favorite debate: would you do it?

For those of us who didn't have to, the question was academic, but compelling. I really thought that I could do it. We all felt a vague impatience with Patty. She insisted on doing the scene in great big white panties and a granny bra. When they're supposed to be making love, it just looked stupid. We'd worked hard on the show and her inability to get past her inhibitions affected us all. I found myself wishing I'd been cast in her role, just to see if I could do it.

As it was, the show went off (so to speak) quite well. Patty wore her underwear and the reviews snarked about it. Darren was brilliant. It was a grand finale to my senior year.

And, just to test my theory, I posed for an art photographer. Some friends had worked with him and he needed models. I went to his studio and posed naked.

Just to see if I could.

So, in some ways, this is my follow-up to last week's post. No, I never posed for Playboy. But out there somewhere are photographs of my nude 21-year-old self. I never saw the results, myself.

I didn't need to. It was all about seeing if I could.