News and ... Writing as Meditation 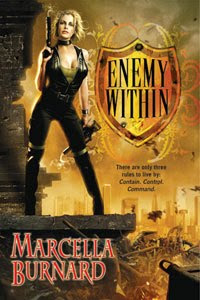 This is going to be a very good year for the Word Whores! Last week, we learned of Marcella Burnard's fabulous news: ENEMY WITHIN finaled in TWO RITA categories! If you haven't already, go pick it up and read what the buzz is about:

After a stint in an alien prison torpedoes her military career, Captain Ari Idylle has to wonder why she even bothered to survive. Stripped of her command and banished to her father's scientific expedition to finish a PhD she doesn't want, Ari never planned to languish quietly behind a desk. But when pirates commandeer her father's ship, Ari once again becomes a prisoner.

Pirate leader Cullin Seaghdh may not be who he pretends to be but as far as Cullin is concerned, the same goes for Ari. Her past imprisonment puts her dead center in Cullin's sights and if she hasn't been brainwashed and returned as a spy, then he's convinced she must be part of a traitorous alliance endangering billions of lives. Cullin can't afford the desire she fires within him and he'll stop at nothing, including destroying her, to uncover the truth.

And Jeffe Kennedy also has exciting news. She sold SAPPHIRE to Carina Press. It'll be available Fall 2011, and she'll be working with Deb Nemeth as editor. Here's a sneak peek:


M. Taylor Hamilton, a successful executive, runs her life with smooth efficiency. She’s on track with her ten-year plan – which includes CEO at year eight – and she’s reaping the benefits of her hard work. Never mind that her personal life consists mainly of hitting the gym and grocery shopping.
Enter the seductive Adam Kirliss. They’ve spent nearly a year in meetings closing a big deal, and it seemed he took it well when she declined his pass early on, but everything changes at the deal-closing celebration on her boss’s yacht. She puts up with escalating intrusiveness, like asking what the “M” in her name stands for, to keep things smooth. That much rope, however, is too much. Taking advantage of the shadows, Kirliss handcuffs her to the rail of the yacht, taunts her with her needs and shatters her control. He gives her the safe word “Sapphire,” in tribute to her eyes, but she refuses to show weakness by using it.


Taylor is willing to write the adventure off as too much champagne and too much work. But Kirliss pursues her, challenging her to a date with him. She breaks down and agrees to one lunch. Over the meal, Kirliss alternately romances her with roses and unsettles her with suggestions of what he’d like to do to her. He’s determined to prove that she longs for the loss of control he can give her – that her buried self, M, needs – and the passionate release that it provides.

I can't wait to get my hands on it. Mark your calendars!

And now, I bring you back to your regularly-scheduled writing as meditation programming...

Writing as Meditation
by Laura Bickle

I first heard of the idea of writing as sacred space from my sister Word Whore, Jeffe Kennedy. I've been mulling over the idea for a couple of months, and agree that there is something ritualistic about writing. Spiritual, even. The practice requires frequent devotion and discipline.

For me, once I started to think about it, there are some distinctly spiritual aspects of my own practice of writing. And those are solitude and silence.

I know a lot of very accomplished writers who can work in crowded coffee shops. Folks who can write with the television on and cell phones chirping. I'm guessing that the majority of writers can do that. I can't. I wish I could.

I remind myself that there are a million different ways to write. None of them is wrong, and there is no "right way" to write. No way that is intrinsically better than any other.

But I know what is right for me. And I need to be by myself to write. It's sort of an inner pilgrimage, a meditation. I can't hear the voice I'm writing with over the distraction of others, whether it's chatter or having someone looking over my shoulder. I want quiet, to block out distraction, and focus on the mantra unfurling on the page. It's a mantra that changes, moves, and reveals itself when its ready.

Writing can be like meditation, in that respect. Distracting thoughts enter, usually from the perspective of a critical inner editor. I try to observe those thoughts and let them go. Focus on the page and breathe at it for awhile. Sometimes, my focus is better than others. When it's good, I lose time. There's just me and the idea.

It's then up to me to listen to it. And for that, I need to strip away the distractions and focus on that one thing, for just a little while. At least, until my more "secular" life impinges upon it.