I am not a writer who talks about her Muse.

Many writers do, I've noticed. They mention their muses, the voices in their heads, wrestling with that entity who brings them words - or maliciously withholds them. Some go so far as to name their muse and talk about what he or she looks like.

Of course, some people name their body parts, too, and I've never really gotten that fancy.

I want to say I've always known about the Muses. I've got my yellowed, broken-spined copy of Edith Hamilton's Mythology, copyright 1940, with the 50₵ price printed timelessly on the cover. I bought it at a garage sale (hmm, second book here I've mentioned that I obtained that way), when I was a kid and read it cover to cover. I loved all the stories of the Greek gods, the pageantry and glamor.

In college, as part of my Religious Studies major, I took a course in Greek mythology and learned to think of the stories another way. Apollo isn't just some handsome, blond guy cruising around in a chariot; Aphrodite isn't some hot chick tossing apples at people; and the Muses are not a gaggle of chiffon-draped babes rollerskating to ELO.

This was a fundamental change in thinking for me: all of those deities represented parts of the human spirit. The stories are profound metaphors for how we interact with a random and sometimes cruel universe.

The nine Muses were the daughters of Zeus and Mnemosyne. She is the goddess of memory (from when mnemonic comes). Zeus has been glorified more over time - indeed, he went from fairly minor god in older histories to king of the Pantheon much later - but the most important aspect of Zeus is that he represents the bolt from the blue. He is the powerfully unexpected. It's worth noting that only Zeus can get away with outmaneuvering Fate.

So from these two concepts arise nine sisters, who were originally not individually named. Hesiod said of them:

They are all of one mind, their hearts are set upon song and their spirit is free from care...though a man has sorrow and grief in his soul, yet when the servant of the Muses sings, at once he forgets his dark thoughts and remembers not his troubles. Such is the holy gift of the Muses.

I think that's the feeling we know, from losing ourselves in creating.

Later the Muses were more pigeonholed, as such:

No wonder writers glommed onto the concept of the Muses - fully six of them represent writerly arts. It's mainly about poetry because Jane Austen hadn't invented the novel, yet. Still, I think this really points up that genres change over time. 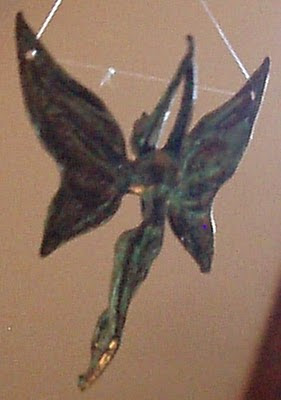 The Muses accompanied Apollo, who functions as Truth. The Muses said, "We know how to speak false things that seem true, but we know, when we will, to utter true things."

Every writer knows what that's about.

I don't feel like I have a muse. I don't really hear voices in my head. They don't natter at me in the middle of the night. Sometimes I wake up with a lovely story in my head, but it feels more like a softly glowing gift than a burning drive.

By way of that, I also mean that I don't feel like I make up the stories by myself. Certainly I don't consciously plan them out. That's why I so often write about ritual and sacred space, creating the opportunity for divine inspiration to float in and settle like a rain of petals. (Zeus impregnated more than one maiden that way.)

The bolt from the blue is how you get around Fate.

Email ThisBlogThis!Share to TwitterShare to FacebookShare to Pinterest
Labels: Jeffe Kennedy, My Muse