Walk It Off - Dealing with Injured Characters 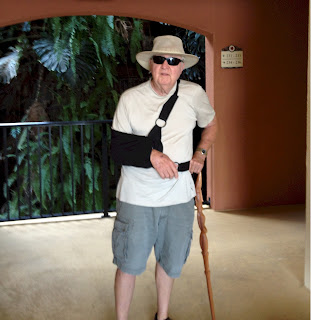 This is Stepdad Dave - after he rolled down a cliff on our first day in St. Thomas and cracked his shoulder blade. For a while there, from the moment I saw him vanish over the edge before I could reach him, and during those long hours in the hospital, I was sure we'd be putting him on a plane home. But he was a serious trooper and kept going. No snorkeling for him, but he got to do a lot of fun things. We ended up renting a glass-bottom boat, so he could see some of the underwater scenery.

The upshot was, we did a lot of adjusting of plans on that vacation, to accommodate his injury. It was at the forefront of our minds at pretty much every moment - what he could and couldn't do, his energy levels, the pain medication, etc.

All of this is by way of saying that, when characters get injured in our books - which, in SFF books, they pretty much inevitably do - then that is a thread that must be carefully tracked. It's far too easy to forget that a person is hurt and needs time to recover. At the same time, long recoveries can bog down a story's pace.

In the second novel I ever wrote - which remains unpublished - my heroine got terribly injured. As it was set in the modern world, there was no magical healing available to get her on her feet. Being a newbie novelist, I tried to stick to reality, which meant my heroine spent pretty much the entire middle third of the book laid up in the hospital.

The pacing went totally through the floor. Effectively disabling your primary POV protagonist does exactly the same to the story. I don't recommend it. I could maybe do a better job of it now, as I have better skills and might be able to find ways to up the tension because of her bedridden state. That's what it takes. Either that or skipping time.

If you manage to keep your character out in the action, the injury and recovery time must still be a constant thread. They get tired faster and have to rest. They're in pain. Minor stage directions can go awry.

For example, in THE TALON OF THE HAWK, Ursula gets hurt right at the Act I climax. (I don't think this spoilery, but fair warning!) She gets abroken nose and skull fracture at the back of her head along with a concussion. Being who she is (including a semi-magical nature), she's able to keep going. But in a scene that occurs less than 24-hours later, I had the hero cupping the back of her head during a kiss. My editor (the fantastic Peter Senftleben at Kensington) commented it out, saying "Um, wouldn't that hurt?"

Well, yes. Yes, it would! And this right there, my friends, is why we need editors. In that very scene, I had him being careful of her broken nose, but I somehow - probably in the course of the several days that elapsed while I wrote all the stuff that happens in between those moments - forgot about the skull fracture.

The take-home message for dealing with injured characters, is careful attention during edits. Susan Elizabeth Phillips talks about doing a complete revision pass for each story element and arc. If an injury occurs, I think it's worth doing a complete pass just for that arc. The injury becomes part of the conflict, waxing and waning depending on other events, and should be resolved with similar attention as any other conflict.

Yeah, and don't stick your protagonist in a hospital bed for a third of the book unless you have a *brilliant plan*. Like Rio Youers pulled off in WESTLAKE SOUL - where the single POV protagonist is in a vegetative state. If you want to learn how it can be done, study that book.