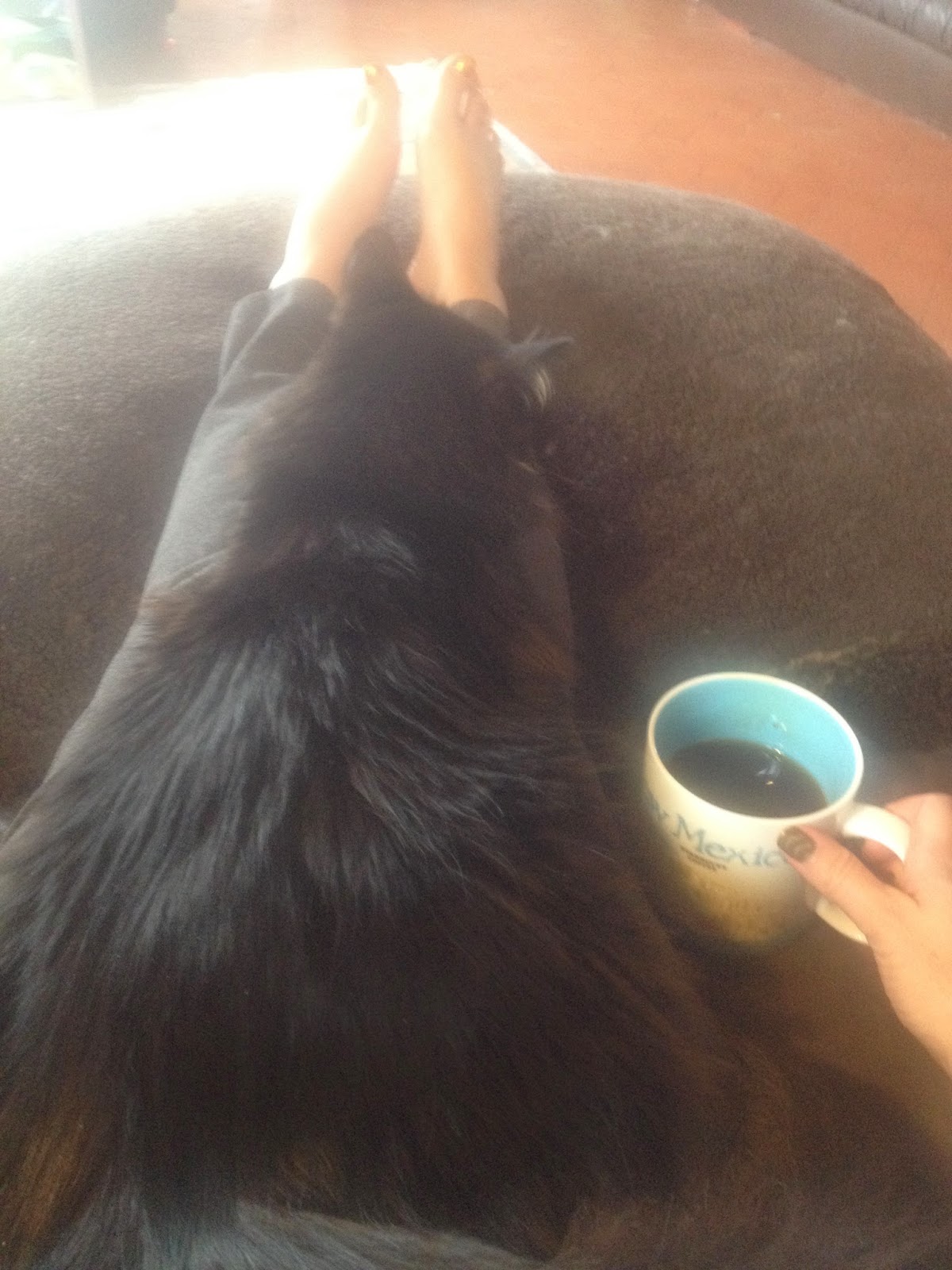 I spent most of yesterday like this, in my armchair, reviewing copy edits for THE TALON OF THE HAWK. Made it through 307 of 527 pages. Somebody tell me not to write a book this long again...

This week's topic at the Bordello is our Top 5 Social Media Follows: Who Do You Recommend Following, Why, & On Which Service?

Likely this will come as a shock to no one, but I'm not a huge fan of "must follows." In fact, I'm contrarian enough that I refuse to follow some of the biggies, simply because it annoys me that they're so anointed. Most of the time this anointing strikes me as one of two things: 1) completely manufactured by slick marketing teams, or 2) popularity contests that continue to feed on their own momentum.

I know, I know - but you guys have read my books. I'm all about ways power is used to manipulate.

Also, I'm big on social media being, well, social. Picking out the "must follows" is akin to going to a huge party, asking who's the most popular person there and hanging on the edges of their conversation crowd all evening. Not only won't you find any number of interesting people there, who might become friends, you've missed the whole point of going to the party in the first damn place.

With 2.1 million followers as of this posting, he's kinda big on the Twitters. There's even a syndrome named for him - #NeilWebFail - which is when websites crash because he tweets a link to them and SO MANY people click that the server fails. He's worth following because it's really him tweeting, he talks to Amanda Palmer, so we can spy on their marriage (one of my hobbies - don't judge), and because he uses his power for good and retweets worthwhile causes and furthers the missions of literature and being decent people. He also actually replies to people.

You knew that was coming, right? She only has half the followers Neil does, alas, but she tweets far more. Her twitter stream verges on performance art and she starts amazing conversations. She talks about music, art and helping each other. And she engages with people. She even replied to me when I tweeted about one of her songs. This is as it should be.

I hate click-bait with a burning fiery rage. You know the stuff - the headlines designed to yank your curiosity so hard that you can't stand NOT to click, even knowing it won't satisfy you in the end. This is where Jake Beckman comes in. He clicks for us and tells us the answer, which is usually prosaic. Such as:


Caffeine. RT @OMGFacts: Probably not the best drug ever!
— Saved You A Click (@SavedYouAClick) December 5, 2014

One of the most amusing aspects is when the click-baiters get annoyed and try to get him to stop. After all, their whole schtick is to garner clicks and Jake substitutes his one for all of ours. It's awesomely delicious.

I try to keep this updated, I really do. And the title is a bit of a misnomer because I throw lots of publishing industry types in there. But these are people who say interesting things about books and life. They keep up on who is getting what awards and give thoughtful perspectives on trends and books. For example, one of my twitter friends recently wondered why the poet Louise Gluck was trending. I said because she'd just been awarded the National Book Award for poetry. My friend hadn't been able to Google that info anywhere and I said my twitter stream had been full of it. Hers wasn't. I rechecked and found it was all the agents watching the awards who tipped me off. They pay attention to these things.  Also: books.

What?? I had to say it! If I don't think I'm worth following on the twitters, I'm doing it wrong. I'm selective about what I retweet. I always label my Not Safe for Work (NSFW) tweets, of which there are at least six a day. I keep the book promo minimal and, hey, at least I amuse myself. What more can you ask for??